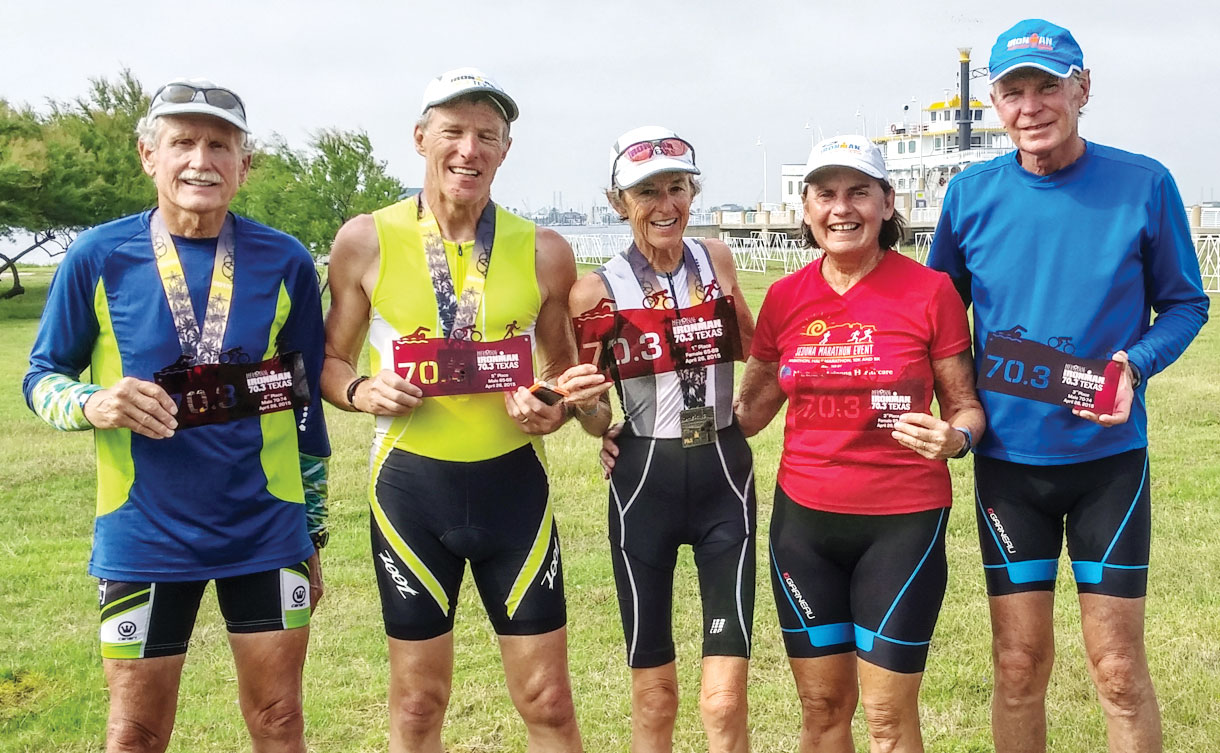 On Sunday, April 26, 2015, five SaddleBrookians competed in the half ironman distance triathlon held on Galveston Island, Texas. This race is a very popular event on the triathlon circuit and is important to the island economy as it still is recovering from the disastrous effects of Hurricane Ike in September of 2008. Some 2400 competitors were entered to include some of the top pro men and women’s triathletes. The competitors from SaddleBrooke were Teresa Woodhouse, Diane Wagner, Charlie Woodhouse, Len Kershaw and Rodger Bivens. Karin Bivens, who couldn’t race with us this time, was there to provide support. The half ironman triathlon consists of a 1.2 mile swim followed by a 56 mile bike and finishing with a half marathon (13.1 miles) run. For this race the swim takes place in Galveston Bay; the bike course is an out and back loop running the length of the island; and the run consists of three loops around the popular Moody Gardens Resort.

The days leading up to the race were heavy with thunderstorms so there was concern that if such weather persisted on race day the event might have to be altered with perhaps even the swim cancelled. But race morning dawned nicely with the resulting water temperature at 77 degrees which meant no wetsuits in the swim would be officially allowed. This meant the swim would be more challenging. Due to the number of entrants in the race there were 20 swim waves categorized by age groups—each group starting five minutes apart. The National Anthem was played and the race began. With swim times varying between 50 minutes and one hour, each SaddleBrooke competitor finished the swim and it was on to the bike portion. While the bike course was typical of an island flat course, rain was encountered during the middle of the course at the far western end of the island. This rain continued for about 15 miles. Care had to be taken on some of the slicker road surfaces to avoid crashes.

Safely back in transition after completion of the bike leg, each of the SaddleBrooke competitors headed out on the run leg. Fortunately there was some cloud cover overhead but the temperatures were in the high 80’s as well as the humidity; a feature to which we were not accustomed. For the run leg there were aid stations approximately every mile. These stations provided gels and other nutrition and also water, Gatorade and Coca Cola. But most importantly ice was available which could be dumped on your head or down your back to help cool your core and prevent cramping. A significant part of the run course was on a concrete surface which is very hard on the legs and necessitates wearing running shoes with good cushioning. The run was a three loop layout which brings you by the finish chute each time with lots of spectators yelling. Karin was well positioned to make sure she could cheer us on and provide encouragement to keep us going. By early afternoon we had all crossed the finish line and begun to recover.

We then awaited the results and the beginning of the awards ceremony. The outstanding performer of our group was Teresa who won first place in her age group. But all of us did well—with Diane coming in third in her age group, Rodger and Len coming in second and third, respectively, in their age group and Charlie coming in fifth in his age group; his group having by far the largest number of competitors among us. Then it was time to party that evening—although all of us preferred having a great dinner and getting to bed early. The next day we had to begin the long drive back to Tucson.