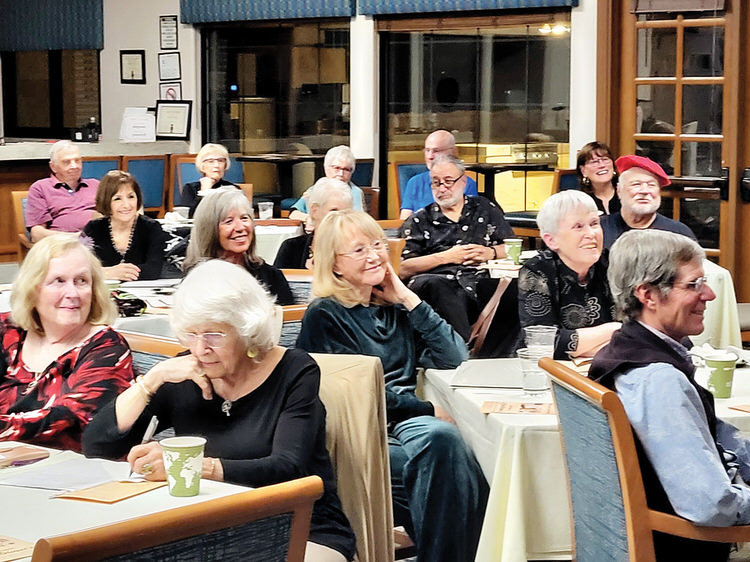 Pictured are some in attendance. 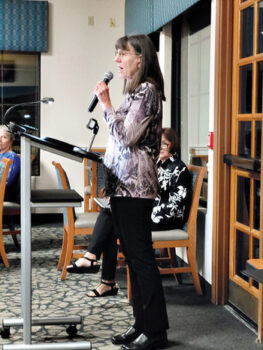 Gloria Day read “Not My Time.”

Every other year a group of writers, authors, poets, memoir writers, screenwriters, and just plain old SaddleBrooke residents get together to show off their talents in an event called The Coffee House. The SaddleBrooke Writers Group was formed in 1991, and the first Coffee House presentation was in 1998.

Coffee and cookies are served, along with the poems, prose, memoirs, and sometimes a skit or two from the members of the SaddleBrooke Writers Group.

On the evening of March 31 this event was held at the Mesquite Grill Room at SaddleBrooke TWO. The support staff and management had the room elegantly set up, and the atmosphere was elegant. Music was provided by Randall Dighton who blended his guitar skill into the introductions and readings by the presenters. His melodies and skills were appreciated and added a special glow to this event with 20 presenters and the audience.

Patricia Freemont Smith is the president of the SaddleBrooke Writers Group and deserves full credit for organizing practice sessions, cutting and editing, advising presenters about holding the mic as though they were talking to a spaghetti meatball, and helping nervous presenters to relax and enjoy the experience.

When Sebastian Conti presented “Food Is Love” and told of his mother’s kitchen, some were moved to tears. Joan Elder related the story when her mother gave her a diamond as she read “Tonight’s the Night.” Gloria Day riveted the audience with her true-life experience as she escaped death from a serial killer. Her story titled “Not My Time” brought gasps from many.

There was a short intermission for coffee and cookies, because that is what a Coffee House serves.

Marsha Foresman started the second half of the program with her “New Year” memoir of experiencing the challenge of a major surgery.

Several SaddleBrooke Writers Group members teamed up to read “Voices,” which was written by a beloved member who passed away last year, Larry Stillman.

Patricia Freemont Smith ended the event after reading two of her poems, “At the Edge” and “Loose Threads.”

All in all, the event was deemed a success, and several in the audience decided to join the SaddleBrooke Writers Group. To join, contact Patricia Freemont Smith at 520-818-1332.