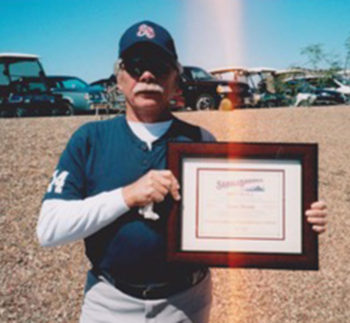 So, who was the driving force behind getting Ed Robson to build our softball facility? Many here believe Gene Bovee was the key individual to make it all happen in the early 2000s. After land was granted and construction commenced in June of 2004, a steering committee of ten softball players were tasked with getting the ball rolling (Bovee, Charlie Brehm, Vic Garcia, Harvey Goltz, Stan Schneiderman, Jerry Smith, Bob Steins, Rick Tessitore, Pete Vallone and John Vosper). Each had various responsibilities during the construction of the ballpark.

Gene was president of the Pima County Senior Softball Association and had written policies and procedures for that organization, so he got to do them again for the newly-formed SSSA. Gene was also responsible for day to day contact with the SaddleBrooke TWO General Manager at the time.

While construction of the playing field was all but finalized in December of 2004, the access road to the facility was not completed until early 2005. Joe Lestingi and Ron Talbot formed a Communications committee and developed an informational website. Outfield sign sponsors were solicited to help the SSSA self-fund the ongoing maintenance, player uniforms and day to day costs the newly formed group would incur. After the initial cost put forth by Robson to build the complex, SaddleBrooke Softball continues to pay its own way without any financial assistance from SaddleBrooke TWO.

Gene no longer plays but up until two years ago umpired in most of our leagues. While Gene downplays his role as a key contributor, many others point to him as the glue who made this all happen.

From all of the past and current players, thank you, Gene Bovee, for all that you did for SaddleBrooke Softball.