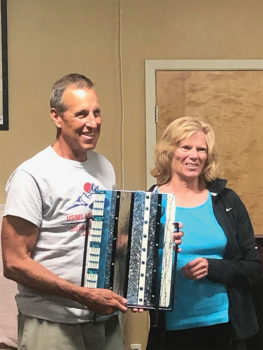 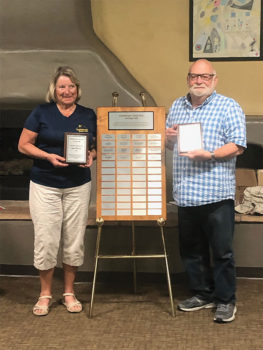 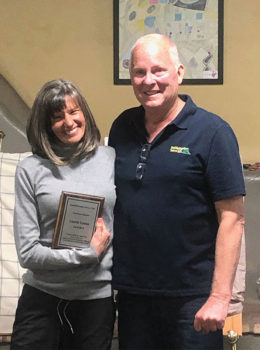 The SaddleBrooke Swim Club celebrated another successful season of not only swimming competitions but also promoting the sport of swimming, encouraging people to learn to swim or improve by offering free clinics, programs and encouraging them to become members of the Swim Club. There is great camaraderie among people who share such a healthy lifestyle. The Swim Club celebrated with a social gathering organized by the Social Committee of Leslie Kurywchak and Diane Wagner at which individuals were recognized, thanked and awards were presented. It takes a lot of people to make the club successful. The President’s Award was presented to Debi and Steve Truesdale. Coach Doug presented the Coaches’ Award to Laurie Loose. Joan Pierce and Jay Selnick received the Heritage Hall Award. Separate articles have been written on those who received the Conquistador Award and those who achieved recognition by United States Masters Swimming as All Americans. In addition, kudos went out to club members who officiated at meets (Jeff Eighmy, Leslie Fore, Joyce Howard, Laurie Loose and Jay Selnick). Also recognized were deck coaches Terese Butler, Laurie Loose, Ann Lowry, Carl Marriott, Lyn Moreno, Mark Randall, Jay Selnick, Doug Springer and Debi and Steve Truesdale. Volunteer coordinator Trish Tewksbury thanked 51 club members including spouses and friends for volunteering to time at events. Also, volunteers counted laps, coordinated swimmers, greeted people and helped check-in swimmers for meets and assisted in other areas as needed. Even though the official coaching discontinues for the summer, there is a summer swim program led by Dave Taylor that provides workouts (written by several coaches) so that people can continue to do workouts either on their own or meeting as a group and following the printed workouts.