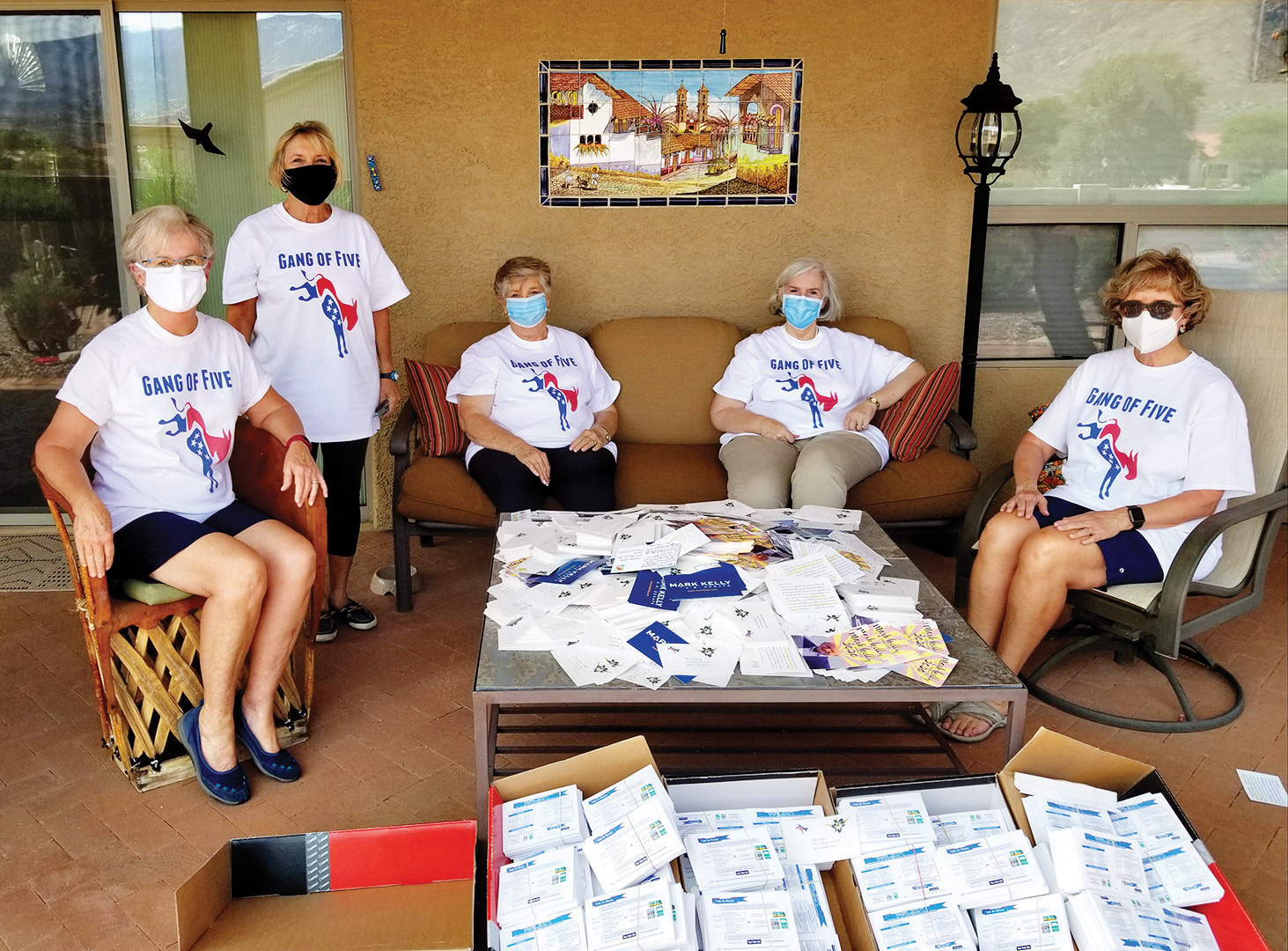 The “Gang of Five” with some of the almost 20,000 postcards that were sent out urging recipients to vote Democratic in November. Left to right: Karen Schickedanz, Edie Crall, Jeanne Herstad, Sharon Cotter, and Claire Cordon (Photo by Karen Schickedanz)

It was last January, and Democratic women in SaddleBrooke and SaddleBrooke Ranch were rarin’ to go. What had started as a few women offering comfort and support to one another after the 2016 election had turned into more than 160 activists. They were ready to march and demonstrate, register voters, write letters to the editor, and offer campaign support to Democratic candidates locally, statewide, and nationally.

Then came the virus. Life—and everything else—came to a standstill.

But there was still a strong desire to do something to help Democrats win this year. That’s when “The Gang of Five,” as they eventually called themselves, came up with a plan.

It was called the Pinal Postcard Project (PPP) and was designed to reach registered Independents in Pinal County, asking them to vote for Democratic candidates up and down the ballot in November. “We got the idea after a conversation I had with my friend Holly Lyon,” said Jeanne Herstad, one of the members of the Gang of Five. “Holly, who’s chair of the Pinal County Democratic Party, said she had some projects in mind but didn’t really have the staff or funding to get them done.”

So, Jeanne met with four other Democratic women in SaddleBrooke to discuss how they could help. Besides Jeanne, the group included Claire Cordon, Sharon Cotter, Edie Crall, and Karen Schickedanz. “Because we couldn’t go door-to-door anymore like you would in an ordinary election season, we decided to try persuading voters with individually handwritten and addressed postcards to make it as personal as possible,” Claire said.

Besides contacting the list of Democratic women activists that had been compiled in January, the Gang tapped into their own networks of friends and acquaintances in SaddleBrooke and at the Ranch to get volunteers for the project. Karen crafted the messaging for the communications and the postcards, and Sharon developed a database to keep track of the volunteers and the postcard purchases. “The response was overwhelming,” said Edie. “Pretty soon, we were well over our initial goal of sending out 3,000 postcards.”

During August and early September, the PPP enlisted 160 volunteers to write almost 9,200 postcards to Pinal County registered Independent voters, asking them to vote for Democrats up and down the ballot. The postcards went in the mail at the end of September so they’d arrive around the time that mail-in ballots arrived in voters’ homes in October.

But the Gang of Five wasn’t finished. They also helped the Pinal County Democratic Party send out 10,600 Get Out the Vote postcards to registered Democrats in the county who live in Arizona Legislative District 11. The cards provide information on how and where to vote. Almost 100 SaddleBrooke volunteers worked on that project, and another 95 helped the SaddleBrooke Democratic Club by distributing similar voter information to about 3,600 SaddleBrooke Democrats and Independents. Other SaddleBrookers are doing phone-banking on behalf of the Arizona Democratic Party’s “Mission for Arizona.”

The Gang of Five hopes these projects will help turn Arizona Blue in November. “We really are a team, and the projects worked so well because we all brought our skills to the table and worked together cooperatively,” said Sharon. “This has been so satisfying!”