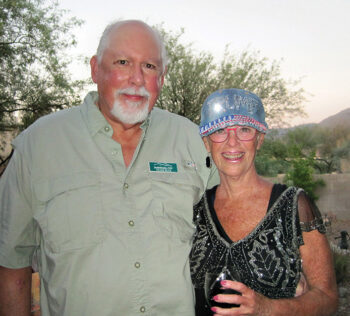 Life is the End of a Long Hot Summer was celebrated by Unit 17ers at the home of Linda Gray and Frank Buck on Sept. 4. Linda and Frank did a masterful job hosting the event when the original hosts had to cancel. They set up the party to accommodate any virus precautions. And not only did they provide their home for the party, they also included entertainment! Linda, a lady of many hats, provided us with a rousing impersonation of Dolly Parton.

Plans for unit activities are in the works so that we can accommodate virus precautions. The Life is a Spooky Halloween activity is in the planning for Oct. 27. On Sunday, Dec. 6, we will celebrate Life is a Holiday Celebration. Watch for emails with all the details.

Unit 17ers will be helping Brenda Seaman head up Unit 17’s participation in the Adopt A Family Program. She is doing a great job of organizing this event, which was spearheaded for many years by Corky Bosch. More details will follow. 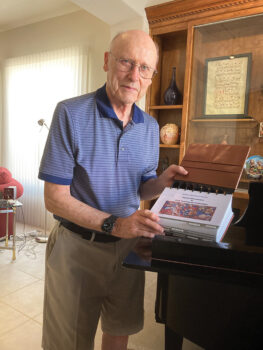 Unit 27 residents are keeping active during this pandemic, whether at home in SaddleBrooke or on the road. Don Burkhead says he and Jeanne got tired of being confined and decided to visit family members living in various parts of California. They flew to Monterey, where they visited Big Sur and other sights, and ate lots of seafood. Then they drove to San Jose, staying at Hayes Mansion. They next flew to Burbank, staying at the Hyatt in Valencia, and then driving on to San Juan Capistrano, their last stop before flying back to Tucson. Don says they dispensed their “vast wisdom and knowledge along the way.” They enjoyed all the visits with family; but they were also happy to return home to SaddleBrooke.

Karen Erickson reported that she and husband, Don, along with Betty and Rick Cole, teamed up to compete in the third annual Folds of Honor golf tournament at MountainView. They also, individually, sponsored holes. This writer, while on her morning walk, happened upon the fearless foursome just as Karen was making a well-placed chip onto a green, which apparently got her a prize. Well done, Karen! As of the day before the tournament, total donations had exceeded $19,000. Impressive!

It’s always interesting to find out what new task Carol Merlini has undertaken every month during this pandemic. This time it was a project that she had put off for a couple of years, which was to digitize, or attempt to digitize, her CD collection in order to run it through their home audio system. She says she has made it halfway, by burning all the CDs to her laptop. However, her technical prowess ran out when she attempted to transfer the music to an app on her iPad that runs the home sound system. She would probably appreciate hearing from one of our residents who is technically familiar with integrating different technologies to run an audio program.

Chuck Aurand may have postponed his normal world travels for a while, but he is not letting any moss grow under his feet! As planned, he donated his vast collection of period woodwind and folk instruments to Michigan State University. Portions of the collection’s 176 instruments are currently on display in MSU’s Music College. With the help of his talented family members, he created an impressive catalogue of the instruments. It contains a picture of each donated instrument, labeled, and placed within the catalogue by type and category. The catalogue itself looks like an oversized Rolodex, providing easy access to the information about any given instrument or group of instruments.

Chuck spent most of his working years as a music professor; but he is also a virtuoso clarinetist. He is currently preparing a recording of his work as a gift to his children, which will be a wonderful keepsake for them. He wants to complete it in this, his 88th year, with a nod to the 88 keys on a piano.

A final shout-out—although Chuck would probably cringe at the memory, he showed what a good sport he is by agreeing to perform at the last Variety Show in March of 2018. He played both a classical sonata and a polka, and the audiences loved it!

We are so lucky to have such a delightfully versatile group of neighbors. Be well, everyone.