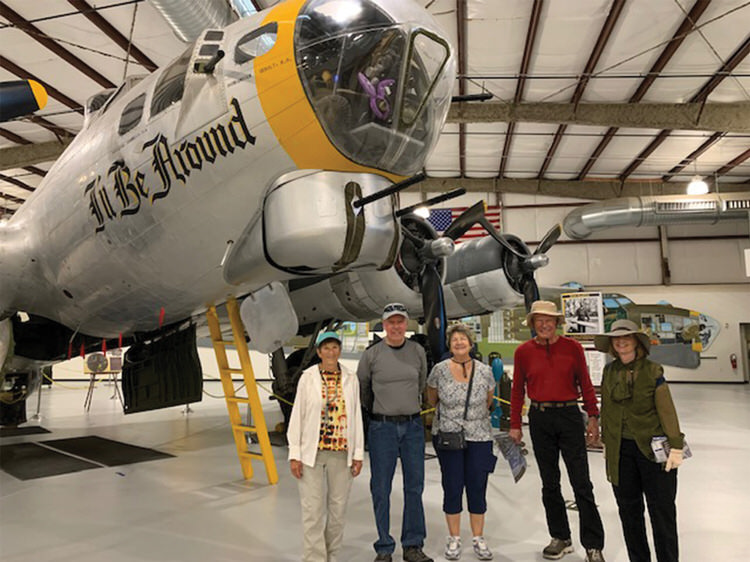 On Monday, April 18, members of the Singles Club toured the Pima Air & Space Museum, the largest privately funded aviation museum in the country. The museum has an unusual history. During the 1960s, commanders of Davis-Monthan Air Force Base and a related group recognized that the aviation heritage of the country—the historic World War II and 1950s-era aircraft stored on the base—was vanishing into a cauldron of smelters. These officials, believing that there might be considerable interest in preserving these about-to-be destroyed aircraft among the public, took the initiative to mount a display of the aircraft behind the fence lines of the base. When this exhibit was enthusiastically embraced, officials understood that a more formal venue could attract a far larger audience. Private funds were raised, federal land was purchased for $800, and a museum featuring the aircraft on the base eventually became a reality. The museum opened in 1976, coinciding with the nation’s Bicentennial. Gradually, exhibits on space travel were included as well.

The museum showcases approximately 400 aircraft within a mile and a half outdoors and 250,000 square feet indoors. A tram tour of the outside hangars, scheduled to be conducted only from Thursday through Sunday, was available on the day of our trip. This was fortunate, given the tendency of Tucson to start its summers early (the high was forecasted to be 97 degrees). The extremely informative and engaging tour consisted of a 45-minute narrated exploration of more than 150 planes and featured the Air Force One that transported Presidents Kennedy and Johnson.

Among the highlights of the museum were aircraft decorated with “nose art.” Most common were depictions of the idealized American woman—scantily clad and well endowed. Adornments were also common on the leather jackets worn by World War II bomber pilots, often featuring insignia of the units, slogans, and the number of missions flown by the wearer. A docent described one decoration that generated a propaganda campaign. The jackets of crewmembers of a B-17 shot down in Germany contained the slogan “Murder Incorporated.” This resulted in the narrative that the U.S. soldiers were “gangsters from Chicago,” intent on rubbing out innocent civilians. (In reality, Murder Incorporated had its origins in Brooklyn—my hometown. One individual associated with this organization grew up in my grandmother’s hometown, Grodno, Poland. Grandma asserted that “the Laskys were crooks in Poland, too.”)

After a tasty lunch at the onsite Flight Grill, we returned to SaddleBrooke. Future plans include a presentation by investment professionals on “How Not to Outlive Your Money” followed by our annual ice cream social, a pizza party, and a presentation this fall by a University of Arizona professor on “The Top 10 Myths Surrounding Health and Aging.”

If you are single in SaddleBrooke and would like to meet other fun and vibrant people, please join us at our weekly Happy Hour, Fridays at 4 p.m. During odd months (January, March, etc.), we meet for drinks and dinner at the SaddleBrooke One clubhouse, and during even months (February, April, etc.) at SaddleBrooke TWO in the MountainView clubhouse. Some members also attend Happy Hour at The Preserve. As clubhouses have been subject to temporary closings and/or prior bookings, check first before attending. For more information, contact Hazel Staloff at
[email protected]