In Memory of Frank Buck 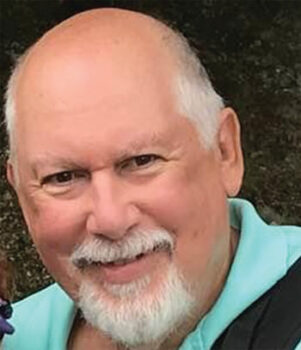 Frank Gene Buck, 75, of SaddleBrooke, Ariz., passed away into the eternal love of God on May 8, 2022, after battling pancreatic cancer.

Frank was born on Oct. 31, 1946, to Maurina Parisi in Fresno, Calif. He worked for General Telephone and worked his way up the ladder to become a corporate lawyer. Frank retired from GTE at the age of 52. Being quite the entrepreneur, he not only owned a gold mine in Nevada and opened a personal legal business, but also was a contractor in the medical field where we met.

In 2005 Frank and I met in Virginia at a training class for electronic medical records. We eventually were on the same project where I was his boss, and often he would tell friends, “She still is my boss.” On this government project, we spent three months in Alaska and three months in Okinawa, Guam, and Hawaii. Once the contract ended, we moved in together. When it was finally time for me to retire, we moved to this beautiful community of SaddleBrooke.

Frank was predeceased by his mother Maurian Parisi, sister Laura Buck, and son Christopher Buck. He is survived by another son and granddaughter.

He will be deeply missed by family, friends, and all who knew him. He is at peace now, joining his mom, sister, son, aunts, and uncles.

A Celebration of Life will be held at Vista United Methodist Church on June 18 at 11 a.m. with a reception following, hosted by Dan and Gail Bergquist, at 65534 E. Rose Ridge Drive from 1 to 4 p.m.

In lieu of flowers, the family requests donations be made to Together We Serve, www.togetherweserved.com.

Don’t grieve for me, for now I’m free

I’m following the path God has laid you see.

I took his hand when I heard him call

I turned my back and left it all

I could not stay another day

to laugh, to love, to work or play

I found that peace at the close of the day

If my parting has left a void

Then fill it with remembered joys

Oh yes, these things I too will miss.

Be not a burned with the times of sorrow

I wish you the sunshine of tomorrow.

My life’s been full, I savored much

Perhaps my time seemed all too brief

Lift up your hearts and peace to thee

God wanted me now, he set me free. 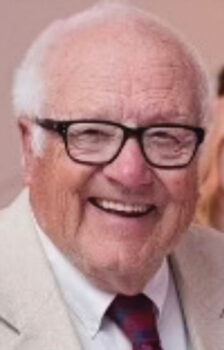 Sadly, Richard J. “Dick” Quigg, Sr., passed away on April 19, 2022, surrounded by family at his home in Oro Valley, Ariz. The cause was prostate cancer. Dick was known for his good humor, kindness, and generosity of spirit among his many caring friends and family, and he will be missed greatly. He brought his keen intelligence, competitive spirit, and warmth to his favorite activities—bridge, tennis, singing, and bowling—winning bridge tournaments into his 90th year and beating opponents much younger than himself on the tennis courts.

Dick lived in SaddleBrooke, Ariz., with his beloved wife Linda for the past 25 years until, after a long bout with cancer, Linda passed away in late January, at which point he moved to All Seasons Oro Valley. They shared a happy life together in SaddleBrooke with many friends and activities. They traveled extensively, following a shared passion to engage with the world. Dick was the captain of the SaddleBrooke Tennis team for many years, sang in the SaddleBrooke Singers, bowled as part of a team, played tournament bridge with the Adobe Bridge Club, and was known as the “Godfather” of all the SaddleBrooke Duplicate Bridge Clubs. He became a Life Master in the American Contract Bridge League in 2011.

Richard Quigg was born in Bethlehem, Pa., in 1930, the son of John Paul and Frances Quigg. He graduated from Liberty High School in 1948 where he played on the tennis team and developed his passion and skills in the game that led to a lifetime of tournament winnings. He earned a B.S. in metallurgical engineering from Virginia Polytechnic Institute in 1952, an M.S. from Lehigh in 1954, a Ph.D. from Case Institute of Technology in 1959, and a J.D. from Cleveland-Marshall College of Law in 1966. He worked for TRW for many years in Cleveland (where he posed for a full-page ad that ran in nine national magazines in which they cut his hair in the photo), Jetshapes in New Jersey, and Cannon-Muskegon in Muskegon, Mich. At Cannon-Muskegon he became responsible for international activities and began to rack up the frequent flyer miles in earnest.

His 1990 Christmas letter states, “Was in Japan (twice), Korea, Taiwan, Australia, England, France, Norway, Denmark, Switzerland, Germany, Sweden, and Hawaii, all in 1990.” As a very sociable person, he enjoyed the marketing role. He is succeeded by sons Richard, Jr., of Buffalo, N.Y., and Daniel of Brecksville, Ohio; daughter Laura of New York City; seven grandchildren; two great-grandchildren; many loving relationships through marriage; and dog Nacho (now lovingly adopted in Ohio). Despite the distance, Dick and Linda always made the effort—seeing the new babies, attending graduations and weddings, and visiting regularly as part of their yearly trips east (and often two ways as they trekked off to Europe or other points east) and big-heartedly hosting groups of his family in Tucson.

In his younger days he coached Little League for his sons’ teams. Forever competitive, he led winning teams but tried to keep the fun in the game. In one game, when the team led by many runs, he told the players they could play any position they wanted, a memory shared later by one of the weaker players who would always ask Laura, “How is your father?” and with a deep sigh, “He let me pitch ….” Clearly a memory he cherished. Another claim to fame is that in November of 1979, Dick was onboard the American Airlines flight, a plane that when a bomb exploded in the plane’s cargo hold, forced an emergency landing at Dulles Airport. The bomb was eventually attributed to the Unabomber. Daughter Laura waited for him at National Airport in D.C. for several hours, with no word (pre-cell phone days), and when he finally showed up, she said, “Where were you????” to which he replied, “Didn’t you hear? There was a bomb on the plane.” Laura forever after learned to give people the benefit of the doubt.

Dick Quigg will be remembered for his keen strategic intellect, his love of dogs, the magazines he carried with him everywhere, and the smile he shared with everyone (even in passport and driver’s license photos).