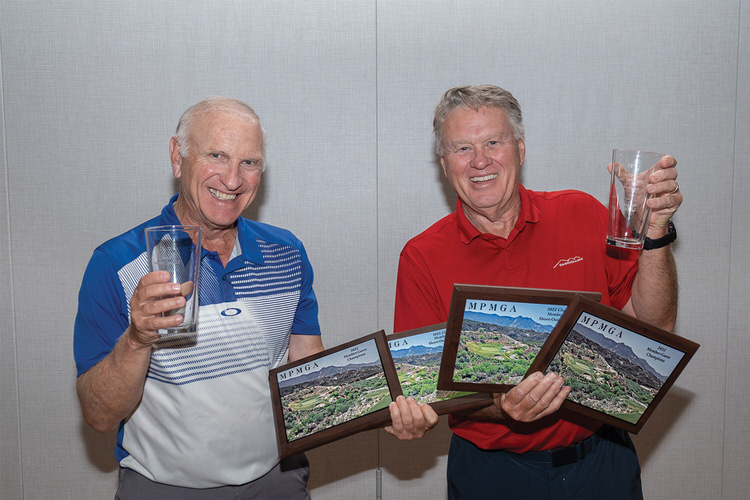 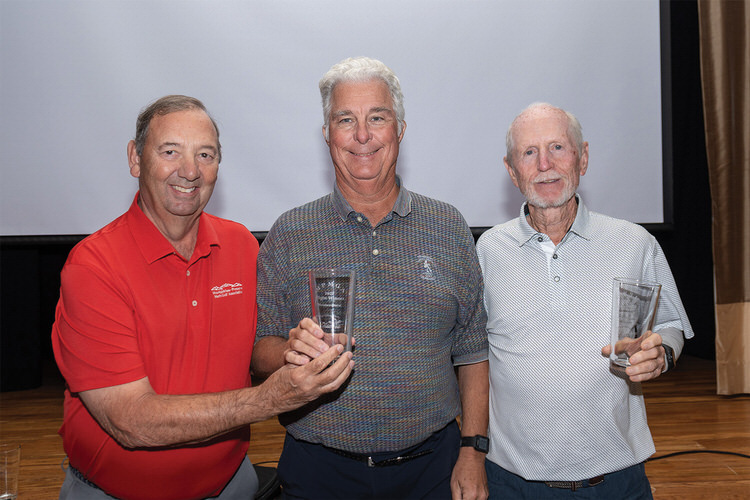 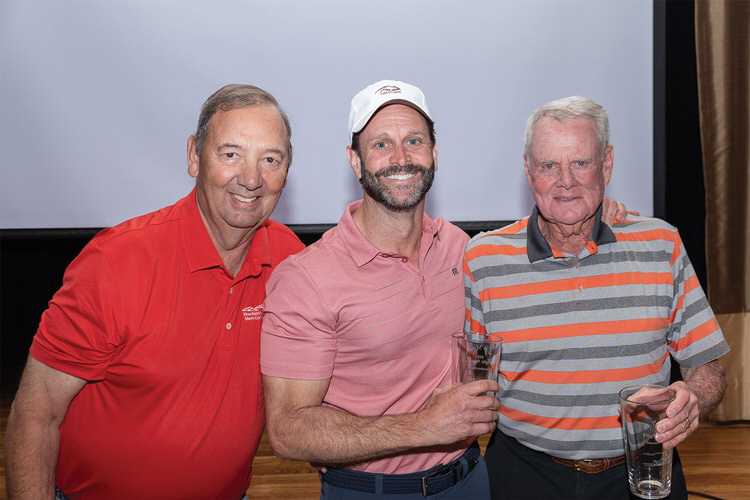 The MountainView-Preserve Men’s Golf Association (MPMGA) 2022 Member-Guest Tournament was held April 28 through 30 at the MountainView and Preserve golf courses. This was the club’s first three-day member-guest event since 2019. Thankfully, our out-of-town guests were able to travel with fewer restrictions.

Member-guest teams were divided into three flights of 10 teams each, based on handicaps: Flight 1, Scorpions; Flight 2, Bobcats; and Flight 3, Rattlesnakes. The 60 participants enjoyed perfect weather, tough competition, and great camaraderie.

Day one was a Shootout played at MountainView. This was an alternate-shot format in which each 10-team flight was assigned a starting hole, and only five teams advanced to the next hole, then three teams advanced, then the flight winners played to determine the overall winner.

The winner of the Shootout was the team of Dennis Marchand and his guest Tom Swikoski from the Scorpion flight. Following the competition, members and guests, along with spouses, enjoyed a delicious meal of BBQ riblets, chicken, and all the fixings at the Mesquite Grill. Some people might even have had a few glasses of beer or wine.

Flight 1: Dennis Marchand and guest Tom Swikoski, with a net score of -9

Flight 2: Dan Schroeder and guest Peter Wright, with a net score of -8

Flight 1: Jim Creel and guest Mike Fullmer, with a net score of -7

Flight 2: George Kaplan and guest Arthur Kaplan, with a net score of -6

Flight 3: Three teams in this flight tied for the lead with a net score of -4: Gary Cain and guest Jim King, Peter Baragona and guest John Lauder, and Chuck Kelsey and guest Mike Batton.

Overall winners after 36 holes of play:

Flight 1: Dennis Marchand and Tom Swikoski, -14. Dennis and Tom hit a trifecta by winning the Shootout, day two low net, and overall low net of the tournament, making them the 2022 Member-Guest Champions.

What an enjoyable three days of competitive golf for the participating MPMGA members and their guests. It was a pleasure for our members to meet and compete with all the guests who came from out of town, as well as those who are non-MPMGA members from SaddleBrooke. A great experience all around.

The awards luncheon was held in the MountainView Ballroom, where the amazing Food & Beverage staff served a fantastic meal of apple-brined pork chop with herb stuffing, whipped potatoes and chef’s vegetable, with a garden salad to start. Oh, yes, and pie with whipped cream for dessert. We now know where to go for Thanksgiving dinner.

Special thanks go to our featured tournament sponsor, Robson Resort Communities. Much credit for the success of the tournament goes to Joe Oczak, tournament chair; Dan Schroeder, tournament committee chair; Pete Lima, special events director; the professional golf staff at both courses; and all those who volunteered their time to assist with activities during the three-day event. Special mention also to Elizabeth Lawson and her great staff for taking care of our food and beverage needs. And we can’t forget to thank Bill George for creating a nice photo record of the event.

If you’re an MPMGA member and you didn’t play in the tournament, you missed out on a memorable experience. Now is the time to start talking it up to your potential partner for 2023.