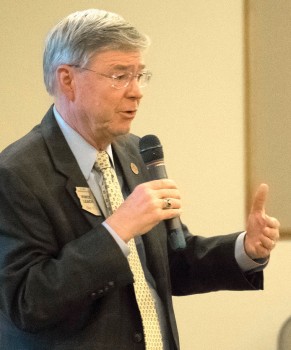 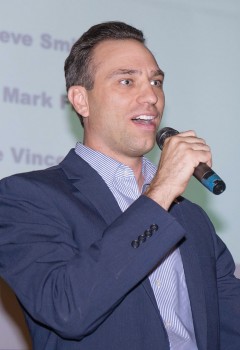 On May 13 your SaddleBrooke Republican Club was most pleased to welcome two of our three elected state senator and representatives of District 11. Unfortunately Representative Mark Finchem was called away for an important legislature meeting that morning. We did hear from Senator Steve Smith and our own SaddleBrooke representative Vince Leach. Both gave a full account of their activities at the First Session of the 52nd Legislature. Senator Smith led off the update by pointing out that he had 11 of his bills out of 13 signed into law by the Governor. Steve explained some of the intricacies of each bill and what had to be done to push them through the process of their gaining passage. Our senator currently serves on five committees which include Commerce (Vice Chair), Education, Federalism, Government and Public Safety (Chairman). Steve and his wife have four children ranging in age from eighteen months to seven years. Steve and his wife Jamie live in the City of Maricopa.

Representative Vince Leach is the current Vice-Chairman of the House Appropriations Committee and also serves as a member of the Energy, Environment and Natural Resources and as a member of the Rural and Economic Development Committees. As part of his discussion Vince gave warning of the EPA’s 111 D which is the proposed rule Carbon Pollution Emission Guidelines for Existing Stationary Sources: Electric Utility Generating Units. This rule essentially demands the State of Arizona reduce carbon emissions by 52% which would mean closing most if not all of the current coal fired plants in our state. Vince strongly suggests that we each contact every one of our Arizona U.S. Representatives and also each of our two U.S. Senators to strongly present our concerns over future electric power costs in our state. Vince also discussed the current Arizona debt situation; how it is expected that while we should have balanced budgets in years 16, 17 and 18. We also carry a current Arizona debt of -$8.3 billion. That the current Arizona Intergovernmental debt is -$1.2 billion. Arizona’s credit rating is currently fourth worst among states; only California, Illinois and New Jersey are worse. Oh yes, our finance costs are ~$1 million/day. We learned that K-12 Education, which spends $5.98 billion as the state investment, will have an $81 million increase in Fiscal Year 16. This historically is the most Arizona has spent on K-12 and is nearly a 20% increase in funding since 2010. Vince also pointed to the continuing hiring freeze which is estimated to save $18.3 million in Fiscal Year 2016. He also said we should expect to be able to get Arizona Travel cards later this year which will allow for approved flight boarding.

Both the senator and the representative answered questions from the floor for fifteen minutes or so. A resounding round of applause closed our meeting and several members stayed longer to ask further questions of our guests.

The SBRC recommends that you go online to the following website for the Arizona State Legislature: www.azleg.gov/MemberRoster.asp?Body=H&SortBy=1. Once there you will be able to learn more about your representatives and senators from the lists by their name as well all of the legislation by clicking Bills. Search through this website as we are sure you will find it both useful and informative.