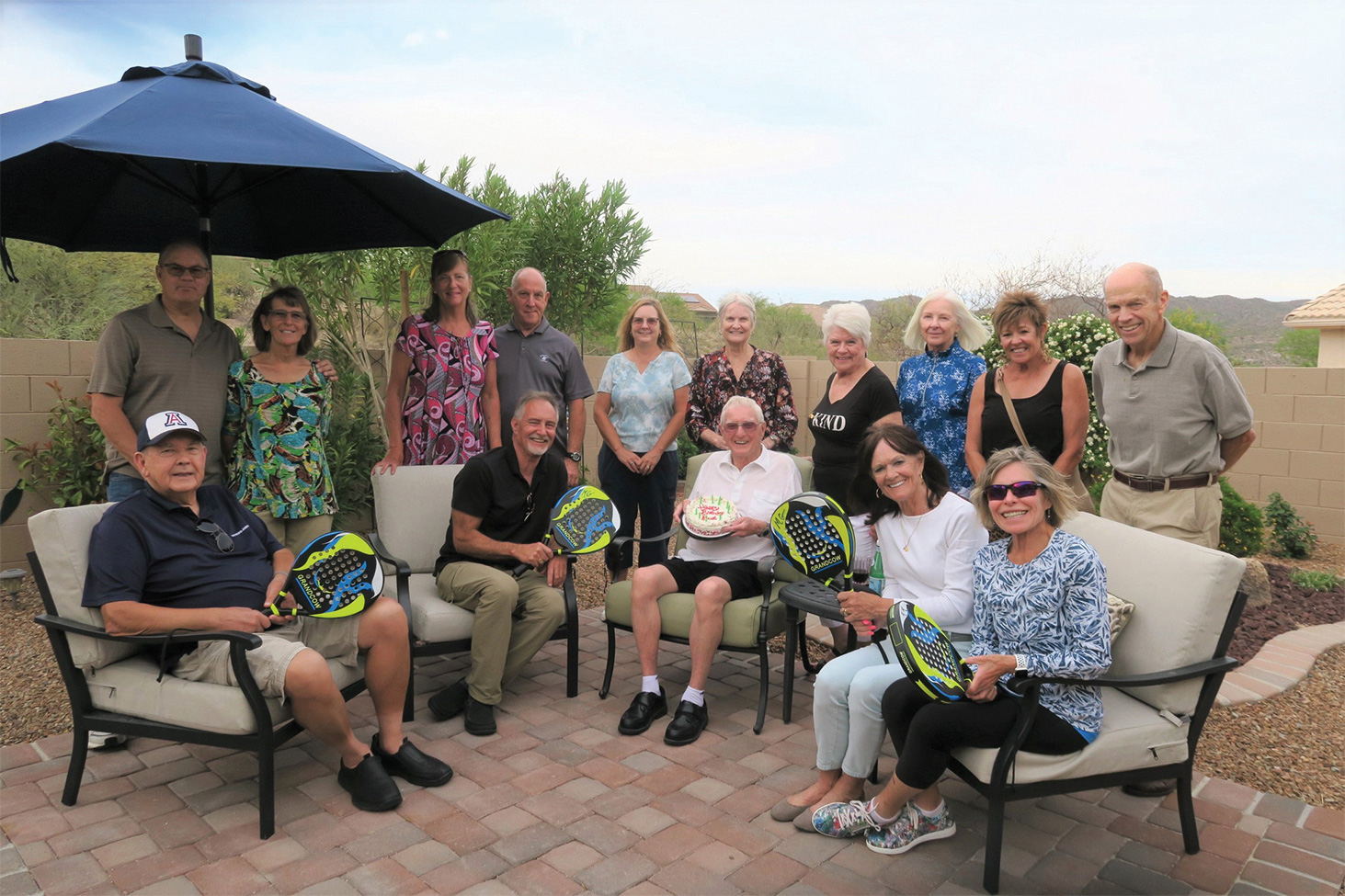 Last January through March, SaddleBrooke residents, Fran Meckler and Carol Kula of the SaddleBrooke Tennis Club, arranged drop-in sessions of pop tennis on Sunday afternoons. Many people showed up to play for the first time—some as total beginners and others as former tennis and pickleball players. When the drop-in sessions ended, Stuart Watkins and Paulette Kasperski weren’t ready to quit. They decided to sign up these beginners (and some intermediate and better players) for groups that they would organize. Between the two of them, they have around 40 players who now join them to play, as their schedules allow, on Tuesdays, Wednesdays, and Sundays. And thus, the friendships began.

The group was very excited that one of their members, Burt Turner, was going to turn 91 on April 12. They were certainly impressed with his pop tennis ability at his age! Molly Gilbertson was so excited that she decided to throw a birthday party for Burt for his special day. Not everyone was able to attend, but those who did had a great time enjoying delicious food and learning more about each other than they could on the courts.

Burt has lived in Tucson for 18 years and in SaddleBrooke for one year. We know how he keeps in shape because his interests include swimming, exercising, and casual hiking, while he keeps his brain in shape by investing. Before moving to Tucson, he was a power boater and a past commander of a U.S. Power Squadron. Although he lived in Sedona for 16 years, people tell him that he is “from heaven.” Burt has two sons, two granddaughters, three great granddaughters, and a great grandson.

When asked what he likes best about living in SaddleBrooke, Burt cites the friendly people and the many opportunities for things to do. That is something many of us here in SaddleBrooke would agree with. Pop tennis has brought these 40 people together to get some vitamin D, exercise, and meet some wonderful people on the courts.

You can find your own group of pop tennis friends since Fran Meckler is currently hosting a drop-in session of pop tennis for all of those who want to learn. Check the Tennis Center reservations on their website, saddlebrooketennisclub.net, to look for the time, place, and courts listed there for the drop-in group. You can also give the Tennis Center a call to check on the time and place at 520-825-0255.