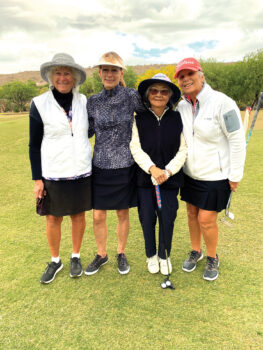 What’s black and white and wet all over? Coyote Classic winners, Janey Clausen, Ann Lange, Ann VanSickel, and Terry Kelley, as they prowled around the course chasing the big prize. (Photo by Judy Grow)

“The thing about golf is that no matter how bad you are playing, it’s always possible to get worse.” This phrase appeared on one of the Wile E. Coyote and the Road Runner cartoon posters placed at tee boxes by the daffy event coordinators Donna Watson and Cathy Quesnell. We call golf that starts out bad, gets worse, and then even worse, “coyote-ugly.” Coyotes watch and wonder why two-legged animals run in packs of four, hunting for a hole that doesn’t move, when they already know where it is. Coyotes howl with laughter and call golf “dog-stupid.” Roadrunners wrangle over why golfers are so excited to find something in the hole that they put there themselves. Roadrunners cackle and call golf “bird-brained.” But the ladies in the MPWGA call golf “a yippin’ good way to spend time.”

The Coyote Classic was played in heavy winds April 26 at the Preserve, and in even heavier winds, pelting rain, and miniature golf ball-sized hail on April 27 at MountainView. Four flights of 68 wet and wild women played variations of the Cha-cha-cha scoring net balls. Somehow, all survived the coyote-wily weather, and nobody chewed off an arm to get out of playing.

The players who left the yips to the coyotes and hit their ball closest to the looney bin on the par-three holes at the Preserve were Jenni Long, Linda Linegar, Debbie McMullin, Gail Campbell; and at MountainView, Jeana Hodges, Jacque Twitty, Karen Erickson, Donna Watson. Yip, yip, hooray for these winners, who took home cozy flannel golf cart seat covers.

Thanks to our pro, young song dog Mike Karpe, for announcing teams to the tee box and for honoring our two sponsors, Coyote Golf Cars and Pride Mechanical. We are blown away by our golf shop staff Charlie LaNeve and Tony Jewett for their assistance, and we give warm fuzzy gratitude to our soggy starters and rangers Joe Sieverding, Rennie Temple, and Pete Sheehey. An endless evening of “Owooooo! Owooooo!” to Donna and Cathy for their creative cartoon work and door prizes. We have added a new acronym to the latest edition of The Comprehensive Glossary of Golf: C-U.S.G.A. (Coyote-Ugly Shot, Go Again). Stay looney-tuned to the same time, place, and weather channel next year. Until then—Beep! Beep!