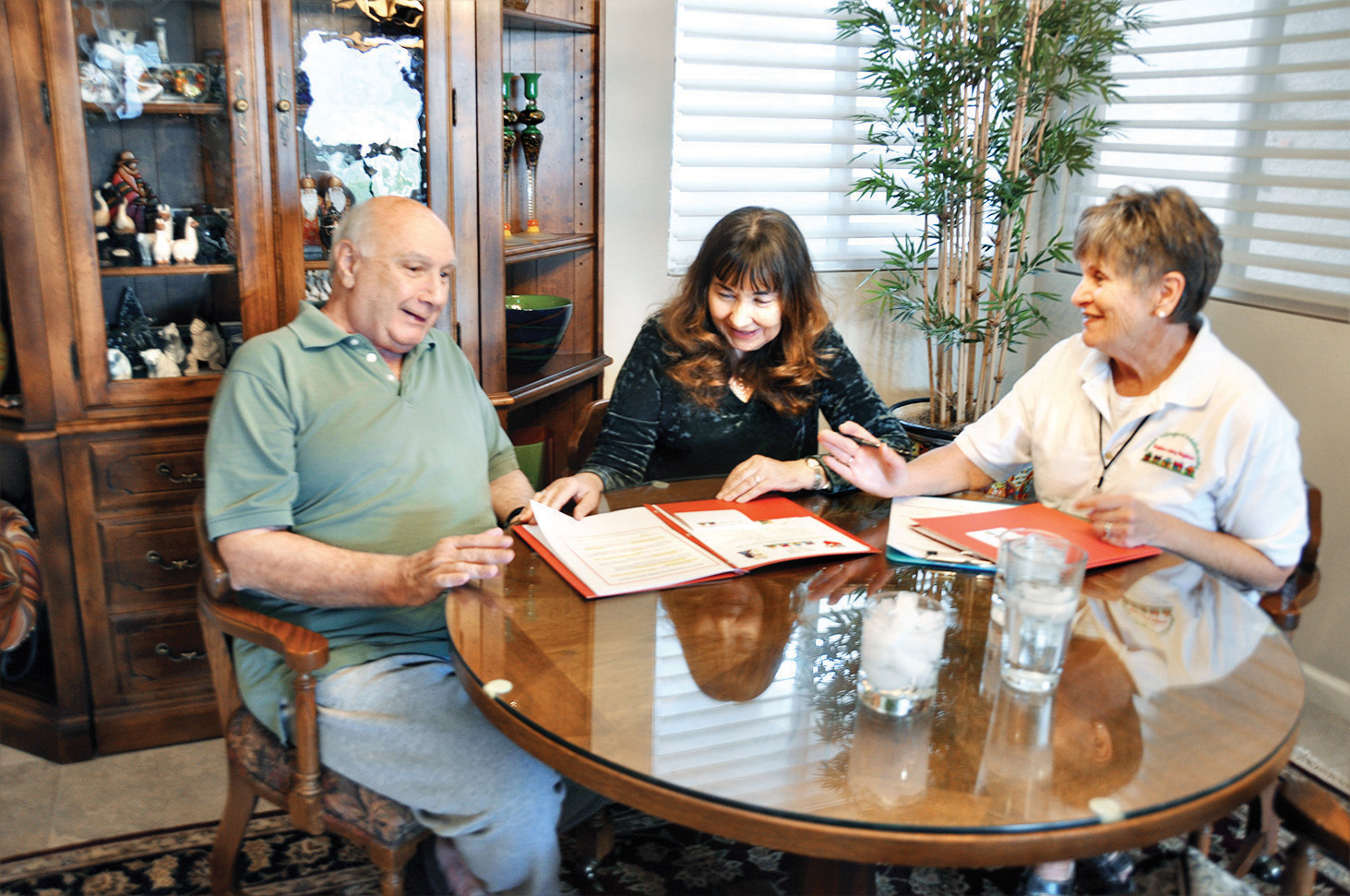 Senior Village is not like a club where people congregate because they share a hobby or sports interest. Village membership is open to everyone in SaddleBrooke, and all ages can utilize the services. From the youngest Village member at 51 years old, to the most elderly at 97, they all know that Village volunteers stand ready to make their lives easier, safer, and more fun.

Vicki and Nick Palumbo, in their early seventies, actively participated in SaddleBrooke clubs and events, but Nick had one particular need that prompted them to join the Village. Diagnosed with vertigo, Nick’s doctor advised him to stay off of ladders. Not to worry, volunteers on the Helping Hands team are readily available to handle minor fix-it projects. Nick also realizes he and Vicki need a lockbox installed by Senior Village to prevent firefighters from having to break a window to enter the house, as they did five years ago due to a garage fire. As Nick says, “Even if we only use services once or twice a year, it’s worth it.”

Knowing how helpful the Village is, Nick and Vicki encouraged her mother Beverly Lindmier to join. At 94 years of age, Beverly maintains a tidy villa, cooks for herself, and takes care of house chores and grocery shopping, yet when it comes to replacing a ceiling air filter, that’s a job for Helping Hands. If Nick and Vicki go out of town, they know Beverly can rely on the Village. “We’re not so worried anymore,” they say with relief.

Ready to try something new, Beverly is considering the Village service of providing instruction and set up of audio book players that will entertain her with mystery stories from the SaddleBrooke libraries. If Beverly decides to have internet installed, Senior Village will give her a smart device for voice commands to play her favorite music and turn lights off and on for her safety.

Whatever your age, whether married or living alone, healthy or facing physical challenges, Senior Village offers services to improve your quality of life with just one phone call. Call 520-314-1042 to join. Annual membership is $60 or $96 for a household. This provides up to 72 service requests. To volunteer, go online to www.seniorvillage.org. Much appreciated donations can be sent to Senior Village at PO Box 8584 Tucson, AZ 85738. 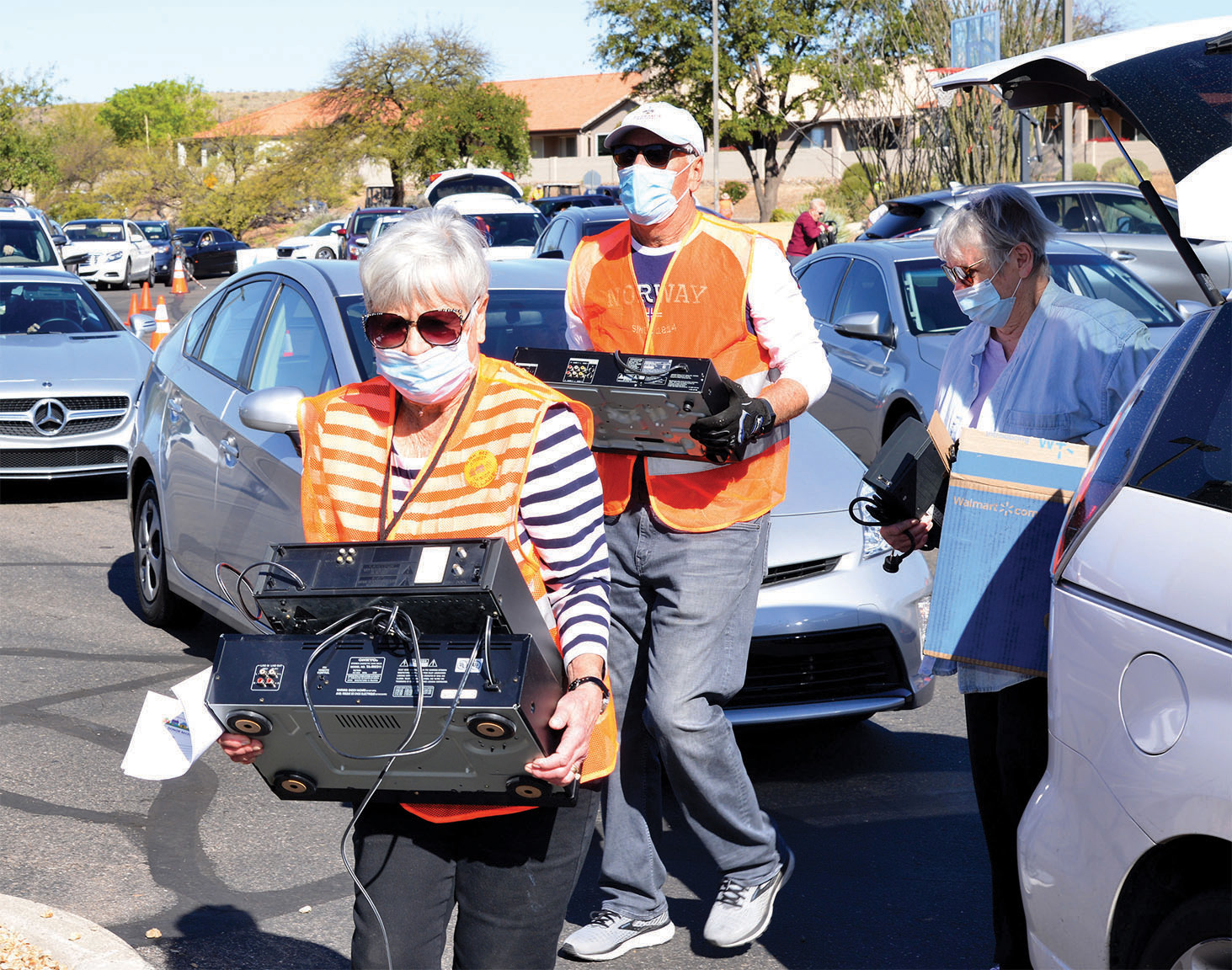 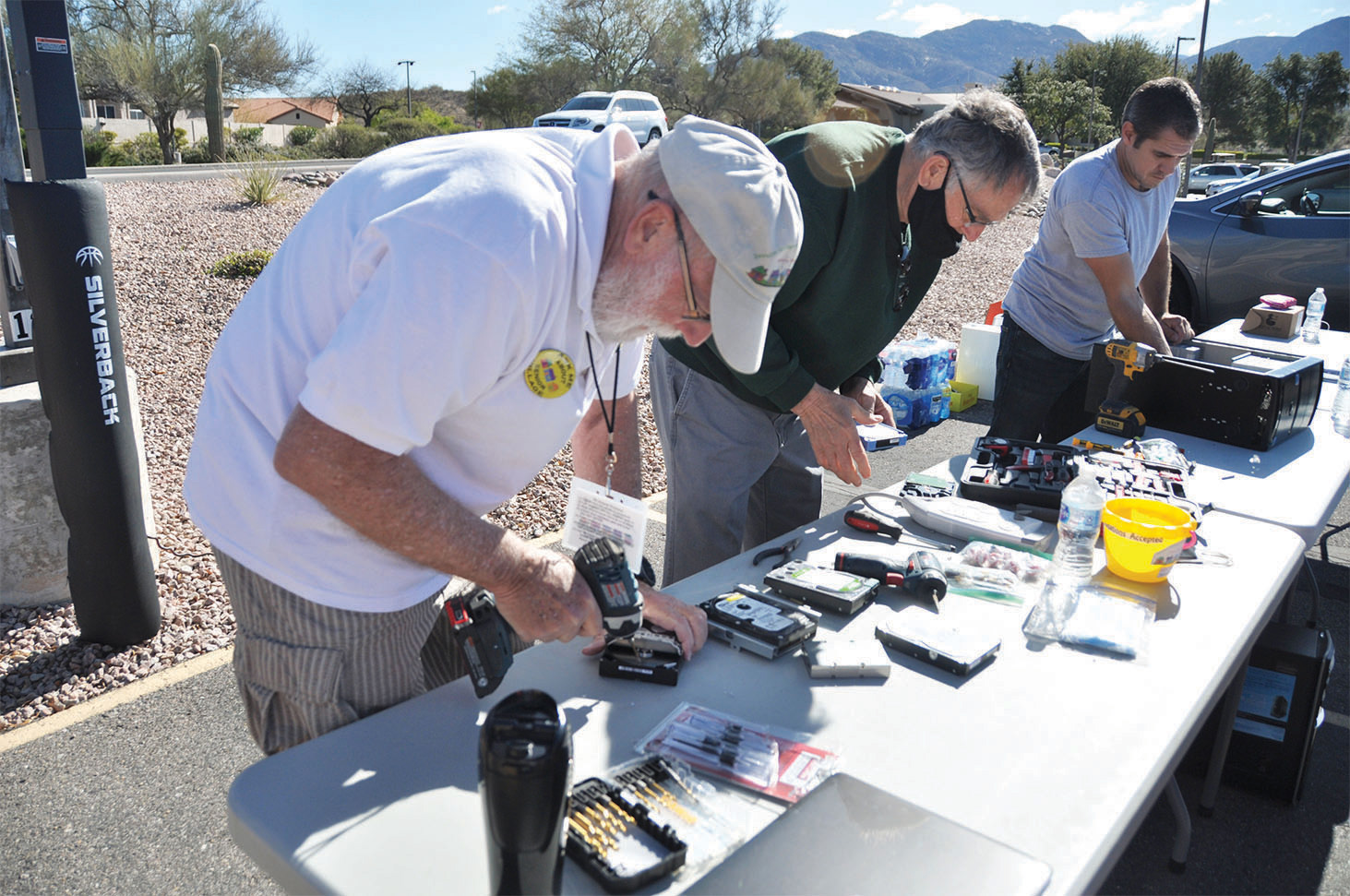 Who would have thought that SaddleBrooke closets and garages could have been hiding so many mountains of stored (and forgotten) electronic equipment? Well, that’s what turned up at the Senior Village recycling event on March 27.

Cars began lining SaddleBrooke Boulevard and Ridgeview well before the start time of 9 a.m. Drivers echoed each other’s comments saying, “I didn’t know what to do with all this stuff,” and “Now I have more room in my garage.” Sally Nadeau was excited to participate in the spring declutter event. She remarked that, “Some people have a hard time getting stuff out of their house, but I don’t.”

Within a short time, the bocce parking lot at SaddleBrooke One was strewn with outdated, broken, and unwanted electronics. Resident, Larry Appel, was more than glad to get rid of four computers, a printer, television, and monitor. Volunteers from Senior Village emptied car trunks of computers, monitors, cell phones, printers, televisions, keyboards, and even some mammoth tube televisions. A team of savvy techs worked to unscrew back panels on computers, remove hard drives, and drill through the drives to make them unusable.

Back and forth, volunteers lifted and lugged equipment to stack next to the two cavernous trucks. Suburban Miners, a Tucson recycle business, will now salvage what they can from these discards and, if possible, make them operable and ready to be donated at their Saturday Free Store. The recycle event, organized by Senior Village board member Carol Kiker, was a win-win for everyone: a fundraiser for the Village, a community service for SaddleBrooke, and an opportunity to put some electronics back into use. Thank you to all who contributed. 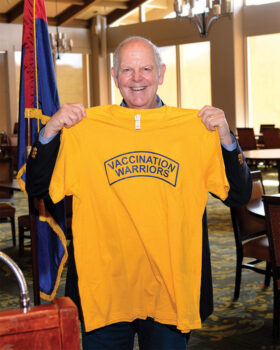 When Arizona Congressman Thomas O’Halleran visited the SaddleBrooke vaccination clinic on Feb. 20, he was so overwhelmed with what he saw that he returned to Washington extolling our community. “To say that I was impressed is an understatement,” he exclaimed.

On April 6, Rep O’Halleran returned for a second visit to the SaddleBrooke One Clubhouse to address an audience of people who played significant roles in the vaccination clinics. He further proved his support of the volunteer efforts by presenting Certificates of Special Congressional Recognition to David Loendorf, chair of Senior Village board; Brianne Spaeth, Desert Life Pharmacy owner; and Char Crossman, chair of SaddleBrooke One board.

Commending the clinic volunteers, Congressman O’Halleran praised them saying, “What works in America are the people in America, their ability to come together. You’re proud to be an American when you see something like this.”

As Congressman O’Halleran travels throughout his 58,000 square mile district, he has seen vaccination sites of various sizes in cities, small towns, and reservations. Nothing, he said, could compare with the number of people being served weekly or the logistics of organization that he found in SaddleBrooke.

The fact that this Herculean effort was staffed only by volunteers astounded him. “This is not an easy thing that you accomplished. For you to step up and get the word out to so many people is outstanding. It takes leadership to reach out and get the people.”

Senior Village Executive Director Linda Hampton underscored the SaddleBrooke vaccination achievement by stating that, “SaddleBrooke was vaccinated before 90% of the country and fully vaccinated before 82%.” Over 500 volunteers had a role in protecting their community from COVID-19. These Certificates of Special Congressional Recognition belong to each of them.