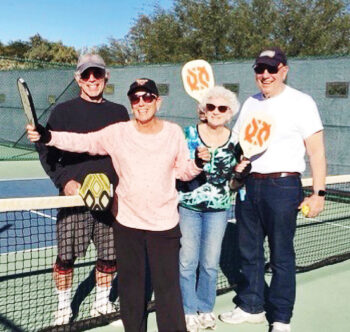 Fun-loving “Picklers” at the Ridgeview Courts: Jeffrey and Eileen Zelmanow and Ilene and Alvin Feingold

It does not take much to lighten the mood of a pickleball player. Put any one of us on a court and we will have fun. That is one of the very best aspects of the sport. We SaddleBrooke Pickleball Association (SPA) members make fun of ourselves at times and we certainly can chuckle at the various pickleball terms that describe our game.

Pickled: This is not a happy hour activity, though if you are unlucky enough to get pickled, you may want to attend happy hour immediately thereafter. Getting “pickled” is pickleball lingo for losing a game without scoring a point.

Pickler: This is not the generic name for your favorite bartender. In pickleball, this term refers to those who play the game.

Kitchen: In pickleball, our wish has been granted as staying out of the kitchen is recommended. In pickleball it is the fun name for the non-volley zone located 7’ from the net on both sides.

Punch: Nope, not a fruity adult beverage. Sometimes referred to as a “push”, this shot has little backswing and mostly guided forward motion.

Two Bounce Rule: Not to be confused with bad bar behavior, this term is the starting two shots of each point, both of which need to bounce before the ball is struck.

Smash: I see where your mind is going. Not made with bourbon, this term is the delivery of the ball with crushing force to put it away.

Slammer: This is not a shot of alcohol, but refers to a player that likes to hit every ball hard.

Skinny Singles: Though this may refer to some of your neighbors, in pickleball it refers to a game of singles played on half of the court.

Dink: From one kitchen to the other, this finesse shot feels a bit like “tag, you’re it” and involves a rally until a mistake is made by not getting the ball over the net (spirit crushing), hitting it out (gosh, darn it), or hitting it high enough to be attacked by the opponents (oops!).

Poach: Also a cooking term, but in pickleball poach refers to unexpectedly snagging a ball that is intended for your partner. This is way more fun than cooking and involves a satisfied smirk when successful.

No Man’s Land: If your opponents catch you there (not far enough back or far enough forward), their attacking shot will often result in a winning point, sending you back to the drawing board with your tail between your legs.

Good Hands: This is not a term for a lucky card game, but refers to a player who has exceedingly good reactions when pelted with the ball at the non-volley line.

Seriously, how could this game be any more fun? Laughter is the best medicine around. If you want an emotional lift, add some fun to your life and play pickleball. SPA encourages you to join us.