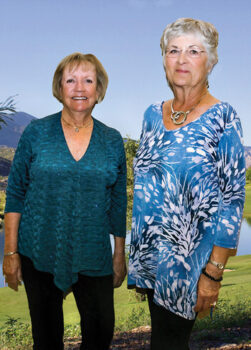 Since 2008, the MountainView-Preserve Women’s Golf Association (MPWGA) has noted the ace winners for both low gross and low net each month. The monthly winners are then rounded up for a playoff round in January to determine and celebrate the Ace of the Year winner for each category.

The 2021 Aces with pretty faces taking first places were Gail Campbell with low gross 83 and Karen Erickson with low net 71. The awards were presented by newly elected MPWGA President Judy Grow at the annual Kick-Off Dinner on Jan. 25. The low scores brought in high-prize checks, which will probably be spent on something other than golf lessons. Among the highs and lows of golf is not knowing which golfer in you is going to show up. The right player showed up for Gail and Karen on playoff day. They came; they golfed; they won.

Gail has been a member of the MPWGA for 12 years, just after moving to SaddleBrooke. She has served on the MPWGA board, won the Presidents Cup, and volunteered on numerous event committees. Gail is also a member of Torreon Golf Club, where she is designing and building a new home.

Karen Erikson has been a member of the MPWGA for 18 years, since moving to SaddleBrooke 19 years ago. She is a second-time Ace of the Year winner, served two terms as treasurer, organized the Catalina Cup three times, and qualified to represent the club twice at State Medallion.

We have high regard for these low-scoring golfers and their contributions to the MPWGA.

One would have to search high and low to find a couple of golf gals more fun to play with than Gail and Karen as they circle the SaddleBrooke adult playgrounds. Watch out! They will probably be taking a low number of strokes and making a high number of good putts. Fore!