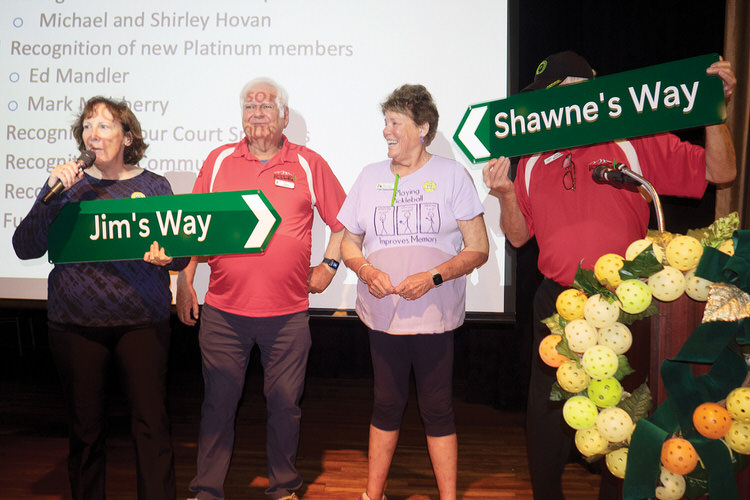 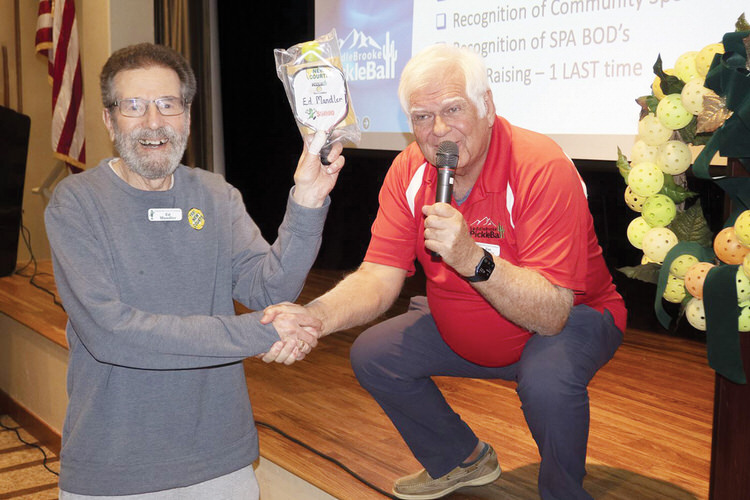 Jim Schlote (right) presents Ed Mandler (left) with a pickleball trophy in honor of his platinum-level donation to SPA. (Photo by Tom Frost)

On Nov. 18, 2022, more than 300 members of the SaddleBrooke Pickleball Association (SPA) and guests attended a late afternoon party in the MountainView ballroom to celebrate the expansion to 14 courts at the Ed Robson Pickleball Center. The MountainView ballroom was filled with tables and chairs for the attendees. The back of the ballroom was lined with a long table of appetizers, which were also served by wait staff around the room. Two cash bars were found on each side of the appetizer table. The front of the ballroom was lined with tables holding silent auction items, ranging from jewelry to pottery and from pickleball equipment to coupons for services. In front of the stage was another table of raffle items and raffle tickets for sale.

One of the highlights of the party was the recognition of Ed Mandler and Mark Molsberry. Jim Schlote, co-chair of the SPA Fundraising Committee, presented Ed and Mark with pickleball paddle trophies in honor of their donations of $5,000, making them the newest platinum-level donors.

Another highlight of the party was the celebration of Mr. Schlote and Shawne Cryderman, co-chair of the Fundraising Committee. Since both Jim and Shawne were retiring as co-chairs, SPA President Barbara Palmeri awarded them with path signs reading, “Jim’s Way” and “Shawne’s Way,” but pointing in opposite directions. These signs memorialized their collaborative approach for fundraising initiatives in their roles as co-chairs, which always came together to support the common fundraising plan. The signs are intended for installation in the paths between courts at the Ed Robson Pickleball Center.

The silent auction and raffle were both well supported by those in attendance, and together they made a substantial contribution toward the court’s fundraising efforts.

Since the court expansion party was so close to the holidays, SPA decided to forego a holiday party this year.