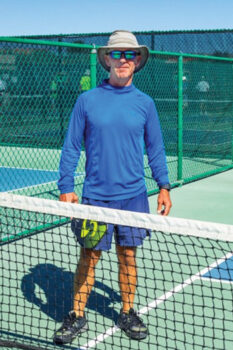 The Ed Robson Pickleball Center now has 14 pickleball courts. However, the SaddleBrooke Pickleball Association (SPA) now has more than 800 members. This raises the question as to how this number of courts can accommodate so many members.

While the eight new courts were under construction, SPA established a Court Allocation Committee (CAC). Past and current CAC members are Dianne Ashby, Jeff Letterman, Janet Jensen, Maude Ruffin, Elaine Taylor, Linda Massie, Denise Leksell, and Ron Flanders, current chair. The CAC prepared a survey that sought to learn the preferences of SPA members for playing on the courts. The survey was submitted to the SPA members, and the CAC received completed surveys from 50% of the members.

According to Ron, the CAC then analyzed the survey results and found that the most popular preference for play was rated drop-in play. This play allows members to arrive at the courts assigned to play without making a reservation, but they play with other members with the same rating or skill level. The second most preferred form of play was group play; i.e., organized groups of players are assigned courts for play during fixed times and days. Court play by members on courts they have reserved was the third most popular manner of play. The fourth most preferred type of play was open drop-in, where members arrive at designated courts for play with other members, regardless of skill level.

In allocating courts, the CAC first analyzed the most popular option: rated drop-in. In this regard, the CAC found that players with a 3.0 rating was the largest number of SPA members. The CAC explored the second most option of groups by contacting the captains of the groups to confirm the size of each group and learn the groups’ needs in terms of days of play.

Based on this analysis, the CAC allocated court slots in “prime time,” 8:30 a.m. to 1 p.m., with priority to rated drop-in, then groups, and then reservations. As a result, 100 slots were allocated to rated drop-in. Groups were awarded more slots; however, those slots included non-prime time slots, such as 7 a.m. slots. The remaining slots were assigned to reservations and open drop-in. After these assignments, Ron said that the CAC has sought to confirm the correctness of the allocation by monitoring the actual use of the courts.