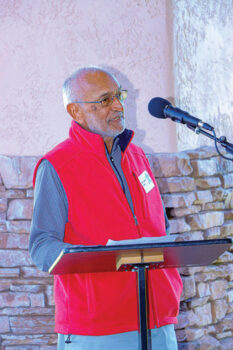 This article is a tribute to a SaddleBrooke resident with a unique background who has a heart for service. As a major donor to Senior Village at SaddleBrooke, Dr. Ashvin Patel was asked to describe how his international life brought him here and why he believes so strongly in the mission of Senior Village. This is Dr. Patel’s description of his unique background, its influence on his character, and the path of his life in his own words.

While I am of Indian origin, I was born in Uganda and lived in Kenya when both countries were under British colonial rule. In the late 19th century, Britain wanted to open the interior of Kenya via the construction of a railway with a labor force of Indians from India, such as my grandfather. My father also worked for the railways and later owned a hardware business in Nairobi. This is how I became the third generation to grow up in Kenya.

As an individual living in East Africa, I witnessed history unfold before my very eyes. I experienced racial segregation, lived through the Mau Mau rebellion, and saw the ramifications of a deadly coup as millions of people lost their lives under Idi Amin. He expelled all Indians. Finally, in 1963, Kenya became an independent country striving toward creating its own identity.

Within the Indian community in Kenya, everyone came from different states in the country to pursue opportunity. We all shared our languages and cultural values. Most importantly, we came to respect one another. Growing up, I learned major Indian languages and Urdu, the language of Pakistan, as well as Swahili and English.

As I entered retirement, I wanted to be closer to family members who are all on the West Coast. I started researching senior communities and stumbled upon SaddleBrooke. This community immediately struck me as a little piece of paradise that fosters community and support.

My role model is my brother-in-law. While he is a retired physician by trade in Nairobi, his heart lies in community outreach and service. He has helped almost every mission, orphanage, and charity that approached him. He spent one week with Mahatma Gandhi, was a personal friend of Mother Teresa, and was honored by past president of Kenya, Mr. Kibaki, with the highest award for charity in Kenya. I am constantly inspired by his unrelenting desire to give.

Like my brother-in-law, I want to pay it forward. As we age, our physical and mental status deteriorates. We cannot do mundane things. Senior Village is there to help with home projects, technology questions, transportation, or assistance with legal paperwork. There is a lot of room for the organization to grow and offer many more services. The Village is a nonprofit organization for and by residents of SaddleBrooke. I generously support it and hope you would, too.