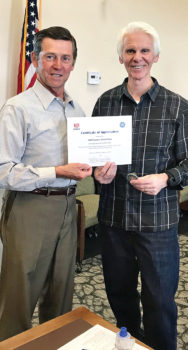 The Catalina Mountains Satellite Chapter met February 16, 2019 at the MountainView Mesquite Grill in SaddleBrooke. The speaker was Gino Elsea, an Army retired Chief Warrant Officer 2, who is also a Department of Defense GS15, retired. He was given an assignment to do a briefing on Turkey for Great Decisions. Mr. Elsea updated the presentation in light of the changes made by the current administration. He explained to us that of all the NATO allies, Turkey represents the most daunting challenge for the Trump administration as 79% of the Turkish population views the United States unfavorably. Prior to the failed military coup of 2016, Turkey was much more westernized and had better relations within NATO. In 1923 the George Washington of Turkey, Mustafa Kemal Ataturk (father of Turkey) established a Secular Nationalist government. Turkey thrived under Ataturk who is still revered by much of the population. In 1992, Turkey joined NATO and is considered a vital member as a bulwark against Soviet expansion. In 2014 Tayyip Erdogan was elected president of Turkey, after having been prime minister for ten years. After a 2017 referendum, Erdogan gained sweeping powers over the government. Mr. Elsea briefed us on the Turkish Military and weapons systems and their alliances.

The Catalina Mountains satellite is part of the Tucson Chapter and encompasses North West Tucson to include Catalina, Oracle, parts of Oro Valley and Marana, SaddleBrooke and Sun City.