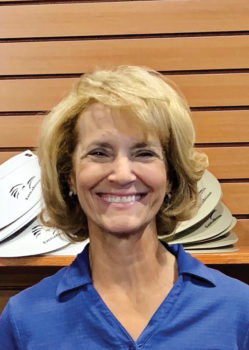 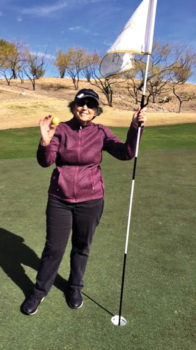 Our Niners group is keeping busy as usual. In February our major tournament was the Founders’ Cup. This tournament is dedicated to those ladies who founded the 9ers League in 1990. In 1996, they held what was known as the Liz Carlson Tournament, the original salute to the group. Liz was one of the original members. In 2006 the name was changed to the Founders’ Cup, but the purpose was the same, to honor those who made our league a reality. At this year’s Founders’ Cup luncheon, President Jo Ann Ellison read the names of all past presidents of the Niners and recognized those in attendance. Congratulations to this year’s winner, Cathe Kropp. The tournament was followed by a great lunch planned by Kat Danner. Kat always has some original treat for the Niners. This time she displayed lost and then found lucky golf balls on each table. Kat assured the members that these balls hold magical powers and encouraged each member to take one and try it out.

Other events in the near future include outside invitationals at Highlands at Dove Mountain and the MountainView/Preserve. Ladies who sign up for these outside invitationals always come back with great stories, new ideas and new friendships made with members of other clubs. Another important tournament is the Club Championship, a multi-day competition with one overall low gross winner named as the Club Champion. This challenging tournament is always a highlight of the year.

Another fun opportunity for members is to join the ringer board. Throughout the year, Ann Irwin keeps a running record of the lowest score each Niner has scored on each hole. At the end of the year, the player who has the lowest total best score for each nine holes is awarded the ringer board prize.

There was a lot of excitement at lunch on January 29 when our president Jo Ann Ellison scored a hole-in-one with a nine iron on Catalina six. Congratulations to Jo Ann.

The Niners are a fun group of women who enjoy playing nine holes of golf each Tuesday morning followed by socializing and lunch. If you are interested in joining us, simply drop by the Pro Shop and pick up an application from the bulletin board in the Computer Room or contact Edie Crall, our vice president.