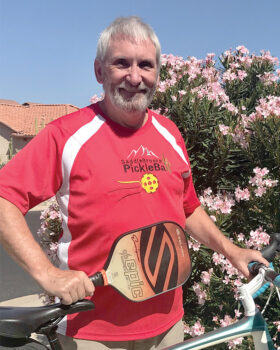 The Institute for Learning in Retirement (ILR) is proud to introduce Dr. Paul Frederickson as a member of the faculty of the ILR. Paul has a long history of college/university teaching experience. He was born in Howell, Mich., in 1951. Paul earned a B.A. degree in Political Science from Michigan State University in 1973. He received his Juris Doctorate degree in 1975 from the University of Detroit, School of Law. In addition, he earned an M.B.A. degree from Michigan State in 1979 with a specialization in finance.

Paul is almost a professional student.

After 10 years of teaching he received a grant from the National Endowment for the Humanities and spent two summers in residence in post-graduate studies in Philosophy at Marquette University in Milwaukee.

Paul’s teaching experience includes being an Instructor of Business Finance at Michigan State University. From 1979 to 1986 he was an Assistant Professor of Economics and Business Administration at Concordia College in Moorhead, Minn. Paul then went to the University of Wisconsin in Oshkosh where he taught for 25 years as an Associate Professor of Law and Finance in the College of Business. Paul’s legal career includes working in a legal aid clinic practicing both civil and criminal law. He also served on a county committee that created and formed the Winnebago County Free Legal Assistance Clinic where he was an advisor and part-time volunteer attorney for seven years.

Paul met Susan who was on the staff at Concordia College and married her in 1983. They have two children. Their daughter Erika lives in Madison, Wis., and is the owner and CEO of Giant Jones Brewing Company. Their son Darren lives in Greer, S.C. and is a controller in financial management for Millikan Industries in Spartanburg, S.C. They have two granddaughters that live in Greer. Sue and Paul moved to SaddleBrooke in 2015 and totally enjoy the community and the many activities. They are active dancers and belong to the SB Ballroom Dance Club and the SB Western Dance Club.

In Paul’s spare time he is an avid bicyclist and a member of the SB Cyclemasters. In 1996 he rode his bike across the U.S. from Everett, Wash., to Williamsburg, Va.; 3,400 miles in 24 days. In 2019, he competed in the 42-mile Mt. Lemmon Gravel Grinder. He also belongs to the SB Pickleball Club and is nationally ranked by the USA Pickleball Association (USAPA) as a 4.0 tournament player. He has competed in the USAPA National Championships five times, 2013 to 2017.

The ILR is glad to have Paul on the faculty and we look forward to his future classes. Who knows, maybe he will teach a class about “cycling for older folks.” For more information, go to our website at www.sbilr.org.