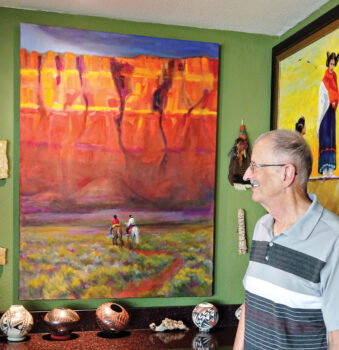 David Thekan says painting for him is almost like meditation; something he gets completely absorbed in.

“I paint because I enjoy it,” he said, smiling. “Although it’s a plus when I sell a piece, I mostly paint for myself.”

Thekan has been creating art most of his life.

“My grandfather was an artist and growing up in Milwaukee, I regularly visited him at his studio. I was fascinated by his oil paints and the resulting paintings. I liked art and enjoyed trying it so my parents sent me to art school,” he said.

While he paints mostly in oils, Thekan has been branching out lately, learning to paint with watercolors.

“Painting with oils is easy,” he explained. “For instance, if you want to add clouds to a painting, you simply layer whites over the sky. With watercolor, you begin with the white on the paper and you have to preserve that while you add in color around your cloud.”

Thekan said he bikes most days in the morning and always carries his phone to take photos.

“I often use those photos as a starting place for a painting,” he added. “I’ve been working on a series of cloud studies, learning how to paint them with watercolors. I’m inspired how they billow over the mountains and how the light constantly changes. I come home and paint most every afternoon.”

Thekan said his work is mostly representational and that while he especially likes to paint portraits, he also enjoys creating landscapes and still lifes.

“I’ve gotten to the point, through a lot of practice, that I can change things around in a scene. I start with an idea, usually based on something I’ve seen, and maybe taken from a reference photo, and what I end up with is not totally based on the photo but goes beyond it,” he explains.

Since moving to Arizona in 2005, Thekan has also painted a number of Native American images.

“I love the desert landscapes and I’ve frequently visited Navajo and Hopi lands. I use a model when painting portraits and you can see the same Navajo man in several of my works,” he commented. “We met because he saw one of my paintings and liked it. He told the gallery owner he’d like to buy it but wanted to trade for a handmade flute he’d made. We ended up trading and since then I’ve painted him.”

Before the stay-at-home orders this spring, Thekan regularly attended a class where the weekly subject was a model in various costumes.

“In three hours or so, everybody using their own medium and style, painted their version and created their own setting for the portrait. I’m always interested in how others see the same scene in different ways,” he said.

Thekan believes everyone can be an artist with enough desire and enough practice.

“If you do something two or three times every week, over time you’ll get better and learn new things. You’ll gain confidence and develop your own style. It’s not magic, just dedication,” he said.