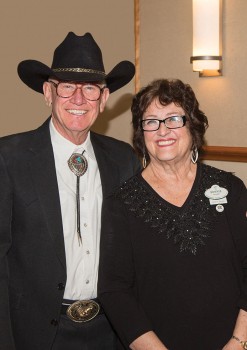 SaddleBrooke residents have access to a professional square dance caller in Larry Kraber who has been calling for 24 years. Larry and his wife Bonnie have helmed the SaddleBrooke Squares dance club for 20 years. As part of the entertainment Larry called at the opening of the HOA 2 models, at the grand opening of the Foothills Mall, at the Harvest festival in Oro Valley, the Senior Olympics, many assisted living facilities, several states including Hawaii and even beyond our shores in Germany. Each venue has a special memory for Larry and Bonnie: the time a resident in Assisted Living who never spoke a word broke into a smile as she tapped her toe or the time it was so hot outside at the Senior Olympics that his records melted! They kept their records in an ice chest after that day!

Larry and Bonnie are well known by people they do not even know! Their video lessons are seen throughout the USA. Larry created a teaching sequence and a program that simplifies definitions. Lessons were shot by a professional videographer SaddleBrooke resident, Richard Beatty. See the video at www.saddlebrookesquares.com. Many say, “I could not have learned to dance if not for the video.” The video has had three million hits in three years by people viewing our website. Larry taught adult education at IBM; a born teacher and encourager, his passion for teaching is rewarded when he sees the faces of new dancers who “get it.” SaddleBrooke Squares has grown to over 100 members.

Larry and Bonnie danced for one year before he decided to take a course in Square Dance Calling. Training included five hours a week for about five months. He had to call for 10 different clubs and be evaluated by 10 different club callers back in the 1980s. The first SaddleBrooke Square dance class was in January of 1995. 20 people were in that class, including Nancy and Fred Pepek who are still dancing!

Today Larry no longer needs an ice chest for records! With over 400 songs on his IPOD you can sing along to tunes like Achy Brakey Heart, If I Were A Rich Man, Macho Man, Purple People Eater, Walk The Line, Zippity Doo Da, Coming Around The Mountain, Good Night Irene and Heart Of My Heart. Larry uses the Hilton system with an excellent amplifier and speaker sound system and a hearing assistance device for easier hearing – “my mike to people’s ears.”

Square Dancing is “a two hour escape from the world.” Social, physical and mental interactions are part of the fun of an eight person team. Larry says, “If you can laugh, you can square dance.” Mark your calendar for October 11, Sunday at 7:00 p.m. in the MountainView Ballroom for a free introduction to square dancing called Give Us a Whirl. www.giveusawhirl.com. No previous experience is necessary. Dress is casual. Singles are partnered up. [email protected], 520-825-2678