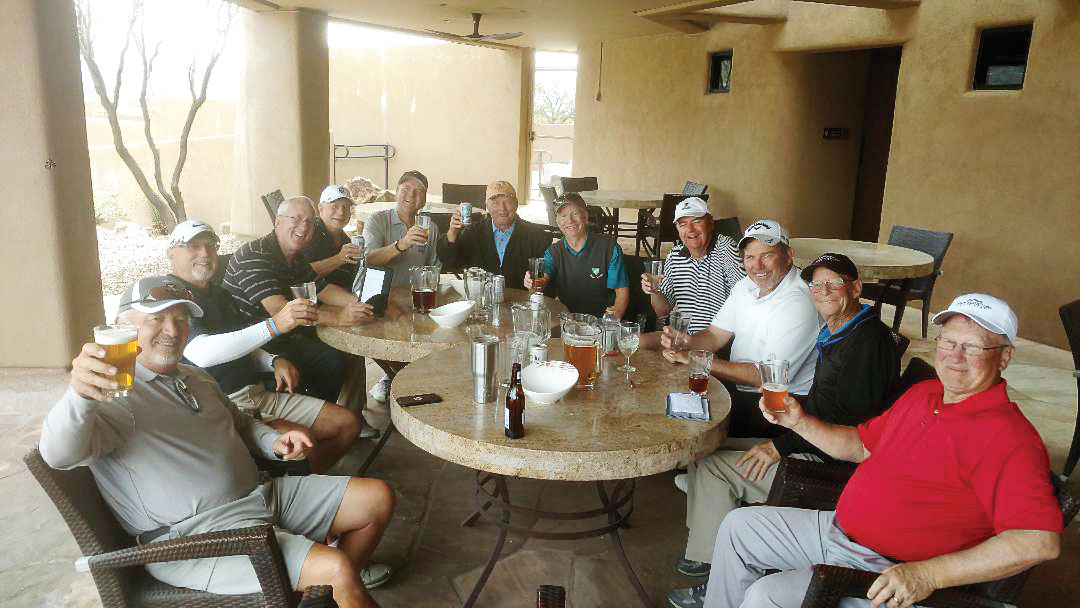 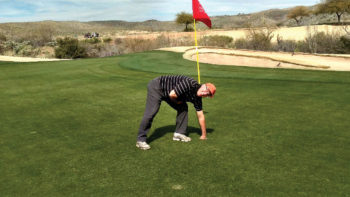 Jim Donat retrieving his hole-in-one ball on the 14th hole of the Preserve.

Jim Donat
How cool is this? As the new Publicity chair for the MPMGA, I get to write about my first hole-in-one. I have been playing this game for over fifty years now. I have seen quite a few hole-in-ones, both as a caddie and as a player. I was beginning to think it would never happen. Actually, that is not true. As a golfer, when you walk up to any par 3, you have thoughts about putting the ball in the hole or at least trying to get it close. Especially if you are in a group that has payouts for closest to the pin. That’s what we were doing on February 27 when we were playing in our standard Wednesday group.
We had just gone through one of those bouts of bad weather and finally we had a day full of sunshine. Other than the strong winds that always seem to blow out of the southwest at this time of year, it was a great day for golf. As our team of Lee Leksell, Don Plapinger, Jerry Hollingsworth and yours truly approached the 14th hole on the Preserve, the wind was blowing hard. The American flag that is always present on that hole was standing proud. Playing the mixed tees that day meant we played from the green tees. To the front red pin, the yardage was 143 yards. With my 9 iron, I aimed left of the pin to account for the strong cross wind we were encountering. The ball was struck well and was tracking just left of the hole. When it hit it kicked right and after the second bounce landed in the hole. What a great feeling. The yelling was heard by the group on the 15th hole. They knew what happened. In fact, when they finished their round, they started a tab at the bar knowing someone else would be paying for it. What a great group of friends. We had nearly five full foursomes in our group that day and we celebrated afterward on the outdoor patio at the Preserve. We all had a great time that afternoon enjoying the beautiful weather, camaraderie and a couple of barley pops. Even receiving the bill did not wipe the smile off of my face.