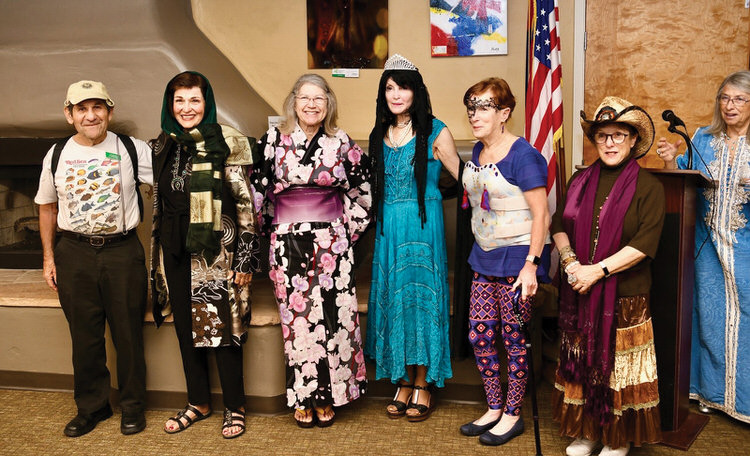 The Jewish Friendship Group (JFG) continued varied activities during the month of March, and we look forward to another active April.

On March 10, the JFG Book Club met at the home of Laurie Colen, who presented the book Nesting Dolls, by Alina Adams. Laurie had personal connections and interesting insights into the book, especially about her family of Russian Jews who immigrated to Brighten Beach, N.Y. During the discussion, most of the 10 women and one man agreed that, while a fast read, the content was a bit thin. That being said, so much of the book elicited memories from everyone about their ancestors—their foibles, superstitions, and beliefs they brought with them to this country—that the book was worth reading, even as a “beach read.”

The April Book Club was held at the home of Alan Levinson on April 14, and the book presented was The Lost Shtetle, by Max Gross. Instead of one presenter, the format required that everyone who attended must present one question and a favorite quote for discussion. Additional book suggestions and presenters for the rest of the year are needed.

The Ladies’ Coffee was hosted by Rhoda Kaplan and Lorraine Stillman at Rhoda’s home on April 5. We are still looking for hostesses for future Coffees.

To make it easier on the women hosting, the JFG has purchased a 45-cup coffee urn, which can be borrowed for these events. You can host alone or with another woman. If you are interested, please contact Sandy Rosen.

By the time you read this article, the first potluck of the new year will have been held on March 23 at 5:30 p.m. in the SaddleBrooke One Activity Center. Judging from the delicious desserts at the Purim party, this should be a gastronomical event.

The most fun event of March was held on March 15 at the SaddleBrooke One Activity Center. The Jewish Friendship Group and the Institute for Jewish Services and Study held a combined evening of fun, desserts, and adult beverages. After all, Purim is a holiday where those celebrating are to become so tipsy that they cannot tell Mordechai (the good guy) from Haman (the bad guy).

Queen Marilyn Anthony and her co-Queen Joan Elder MCed Purim games where everyone participated and made the evening fun.

On the dessert table was hamantaschen from a famous bakery in New York, plus homemade desserts by our fellow members. However, the most joyous event of the evening was definitely the judging contest of costumes. The ladies came out in full regalia with masks and elaborate costumes; the men not so much. The first prize (and there was a monetary prize) went to Arlene Goins, who was gorgeous as Queen Esther (or was she Cleopatra?). The second ladies’ prize (again, a gift card) went to Rhonda Somers as a Japanese Queen Esther (or was she a secret Vashti?). No prizes were awarded to the men, although kudos were given to Willy Halpert for at least an attempt.

The annual JFG second night of Passover Seder will take place on Saturday, April 16, at 5 p.m. in the Vermillion Room at the SaddleBrooke One clubhouse. The Seder will be led by Sam Horowitz and Mark Schwartz, along with Susan Kravitz leading singing, and the traditional games at the end of the Seder. The menu will again consist of gefilte fish, chicken soup with matzo balls, brisket or salmon, and macaroons for dessert. Traditional wine, along with grape juice, will be provided. Checks were to be received by Laurie Colen no later than April 7. The cost for members is $30 and $40 for non-members.

The Jewish Friendship Group welcomes anyone interested in identifying with the Jewish community here in SaddleBrooke. If you are interested in joining our group, please contact Marilyn Anthony at 520-812-1455 or [email protected]