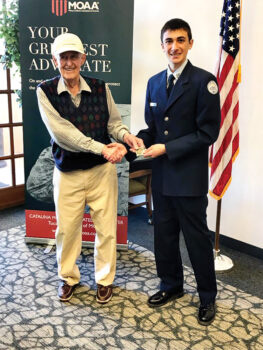 The Catalina chapter of the Military Officers Association of America (MOAA) held their regular monthly meeting Saturday, Jan. 18th at the MountainView Clubhouse. Col. Bill Nagy presided over the meeting.

For the 32 members and guests, Sgt, Bill Doran spoke of his military career from 1969-1971. He did his Basic Combat Training at Fort Ord, CA and the Non-Commissioned Officer’s Academy at Ft. Benning, GA. During his two years on active duty, he was assigned to several U.S. Army bases split between Germany and Vietnam. He had a unique experience serving as a liaison NCO with the Royal Thai Army. His photographs told the story of military life.

Bill remained in the Chicago area to attend college after his family moved from there to Oregon. After his first two years of college, Bill enlisted in the U.S. Army.

After his discharge from the Army, Bill and his wife, Kathy, moved to Oregon where he had a successful career with the Doran Associates, Inc., which dealt with sales of components that ended up in military and commercial aircraft, Tomahawk cruise missiles, Special Forces targeting lasers, and many other items.

For his retirement, he and Kathy became residents of SaddleBrooke. With Bill at the meeting was his son-in-law, Daniel Ramos, and his grandson, Alex Ramos. Daniel is the Assistant Special Agent for the FBI located in El Paso, TX. Alex attends Franklin High School and is a Cadet Staff Sergeant in the Air Force Junior Reserve Officers Training Corps.

The Military Officers Association of America (MOAA) is a non-profit veteran’s service association dedicated to maintaining a strong national defense and to preserve the earned entitlements of members of the uniformed services and their families and their survivors.