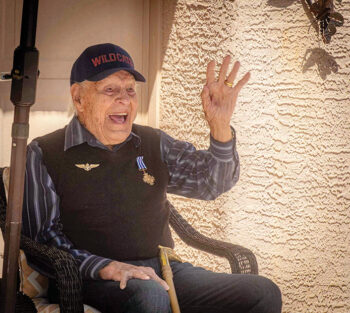 Fred W. Klein passed away at his home in Tucson, Ariz., on July 30, 2020, at age 104. He lived a long, interesting life. Born in Yonkers, N.Y., in April 1916, his early life spanned World War I, the Spanish Flu pandemic, and the Great Depression. The first male in the Klein family to attend college, he graduated from Dartmouth College in 1937 and entered the carpet manufacturing industry in New York. He joined the U.S. Marines during World War II and was a combat pilot in the South Pacific theater, where he flew 63 combat missions and won the Distinguished Flying Cross. He remained a proud Marine for the rest of his life.

Following World War II, he returned to his home in Yonkers, N.Y., with his wife, former Marine Corps PFC Patricia Judd, and resumed his career in the carpet industry. During his long career, he worked in New York; North Carolina; Ontario, Canada; and California and retired in the late 1970s in Scottsdale, Ariz. In 1997, he and his wife moved to the SaddleBrooke Community in Tucson, Ariz., where he spent the happiest years of his life. An avid swimmer, Fred held a number of U.S. Masters Swimming gold medals including a record swim in the 100-104 year old category the day after his 100th birthday.