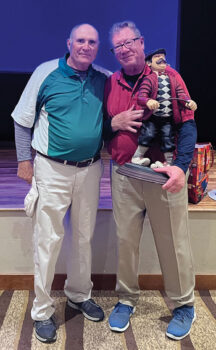 The MountainView/Preserve Men’s Golf Association (MPMGA) held its annual Winter Bash on Dec. 1 at the MountainView Golf Course. The tournament format was a four-man modified scramble, which was designed to allow members to play with golfers they don’t typically play with.

In addition to the free beer and lunch, two-thirds of the 115 participants received prize money. Does it get any better than that?

After the tournament, players gathered in the MountainView ballroom for an MPMGA business luncheon where new board members were elected and the 2023 budget was approved. Prior to those two important agenda items, members were treated to an informative presentation by Kiara Lange, sales manager for Golf Cars of Arizona, one of the club’s longtime Platinum Sponsors.

If you’re a SaddleBrooke resident who enjoys playing golf and making new friends and haven’t yet joined the MPMGA, contact Mike Miller, the club’s current membership chairman, at [email protected], or Dan Sollin, incoming 2023 chairman, at [email protected] It’s easy to get signed up and start enjoying some of the best times SaddleBrooke has to offer.