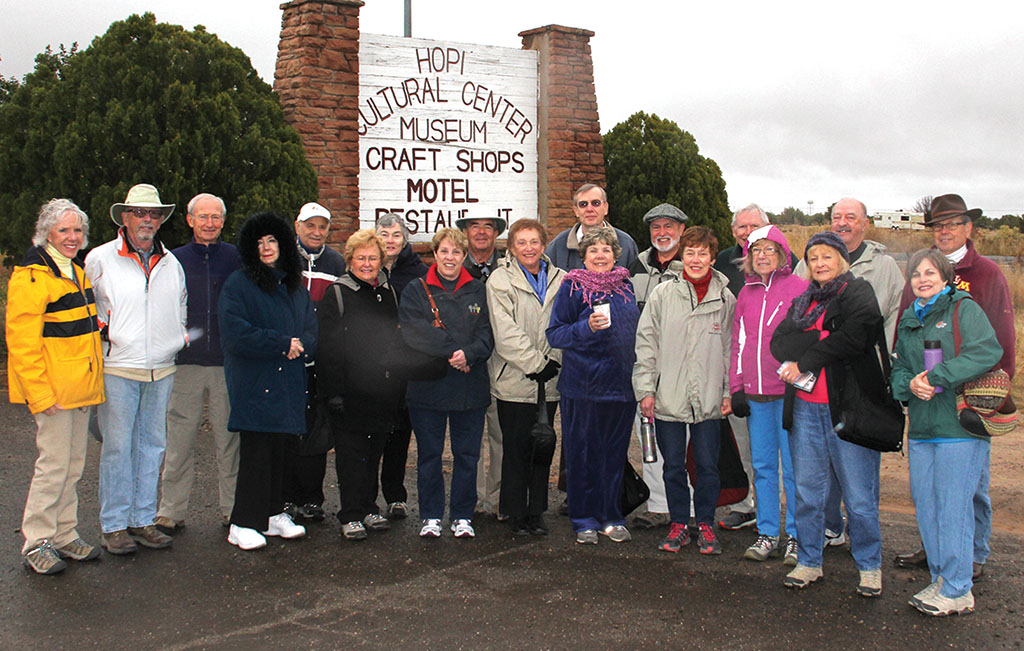 Members of the SaddleBrooke Nature Club enjoyed spending time with the Hopis.

Twenty-four members of the SaddleBrooke Nature Club ventured up to the Four Corners region to spend five days with the Hopis.

The trip was organized by Road Scholar in conjunction with Northern Arizona University. Ray Coin, a Hopi tribe member, was our group leader and star of the program. Ray and Ted Danson grew up at the Museum of Northern Arizona where their fathers worked. They were introduced to geologists, archaeologists, ecologists and paleontologists. The boys learned and eventually helped at the research sites. Ray, an enthralling story-teller, shared his knowledge and experience with a deep conviction that the Hopi story needs to be told accurately.

Lectures from Ray were enhanced by field trips and presentations by other Hopi instructors. A member of the Tewa tribe, Marlinda Kooyaquaptewa, told us about the importance of family and having children to pass on the Hopi traditions. The Hopi society is matrilineal. All property is owned by the women. When married, the man moves into the woman’s home. However, only men hold high positions in the tribes and villages.

Dorothy Ami, a well-respected Hopi potter, demonstrated her skills. We learned about Hopi pottery from the gathering and preparation of the clay to finishing and firing the product in pits of wood, sheep manure and pottery shards.

Fern Lomayestewa of the Sun Clan demonstrated the skill of making Hopi silver overlay jewelry while talking and answering questions about her life as a Hopi. With 40 years of experience, she is adamant about teaching her craft to other Hopis in order to continue this specialized art form.

John Fredericks, a Kachina doll carver, talked about the ceremonial traditions. Since girls did not participate in the ceremonies, men would carve the dolls to help girls recognize and understand the various Kachinas who performed in the rituals. John explained the three different Kachina forms and showed the tools and cottonwood root that are used. Like Ray, he had a delightful sense of humor that just added to his exceptional story-telling ability.

Each afternoon we were taken to a different village on the Three Mesas. These settlements dated back to 1100 A.D.! The homes are still owned by and passed down to the women of the family. Some are occupied year-round. Some are occupied by dozens of family members during the time of ceremonial preparation and performance. There are villages which choose to not have running water or electricity to continue the traditional Hopi ways.

Food is central to the Hopi culture. We were able to see Pam Ovah make piki bread behind her home using the traditional methods.

Ray’s wife prepared a delicious traditional Hopi meal for us the last evening of the program. It was a meaningful end to a fascinating week.