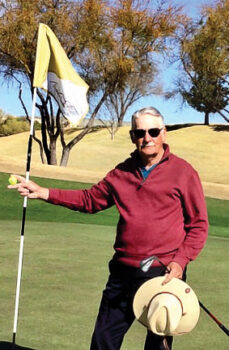 Keith McLean scored his third hole-in-one in four years on March 5 on Catalina 8, 160 yards, with a 5-iron. His ace was witnessed by Dale Cogswell, Frank Earnest, and Don Mann. Congratulations, Keith! All that practice paid off. 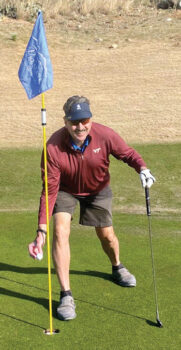 Dave Hill with his hole-in-one at The Preserve on Jan. 25

Dave Hill achieved his second lifetime hole-in-one on the Preserve course, hole number 6, on Jan. 25. He used a 7-iron to make the shot, and the members who witnessed the event were Al Bolty, Don Milner, and Fred Fezatte. 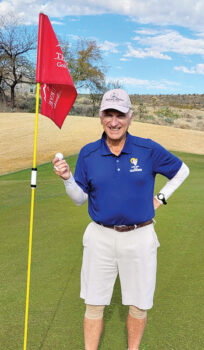 Dennis Marchand and partner, Phil Gray, were playing in the MountainView/Preserve Men’s Golf Association’s (MPMGA) two-man, alternate-shot event on March 3 at the Preserve. They had been supporting each other nicely, but on hole 14, Dennis didn’t even give Phil a chance to contribute. He smacked a solid 8-iron that sent the ball soaring 141 yards to the pin, where it dropped in the cup for his fourth career hole-in-one.

The shot was also witnessed by Shel Jahn and Doug Jones, the other twosome in their group. Coincidentally, the last hole-in-one witnessed by Dennis was made by Shel Jahn. Those two guys should stick together.

Dennis has lived in SaddleBrooke for 11 years and has been playing golf since he was a teenager (That explains some things). Three of his aces have been at our SaddleBrooke courses, and one was in Los Angeles.

Congratulations to Dennis on an amazing shot. As for his playing partner, we’re sure Phil didn’t mind sitting out that particular hole.