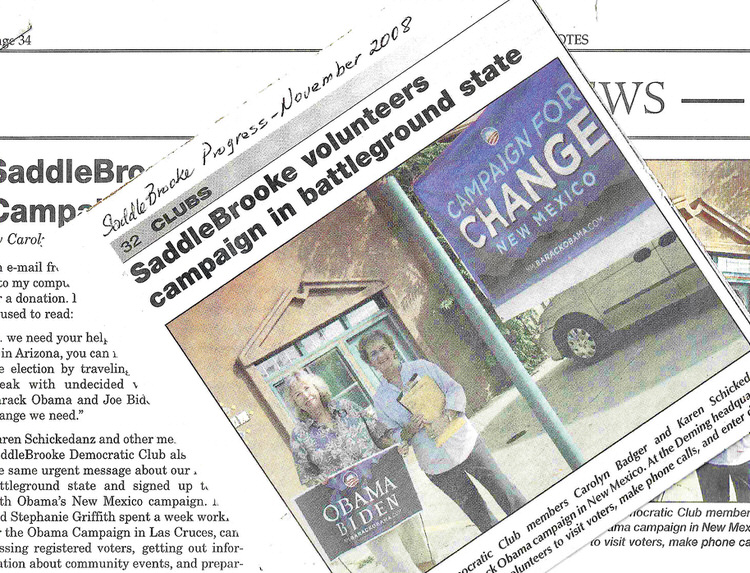 Carolyn Badger and Karen Schickedanz published in the ‘SaddleBrooke Progress’ in 2008.

At our fabulous dinner on March 1, we introduced one of the founding members of the Demo Dames Who Give a Damn, but there were four founding mothers. Who, or what, was this group, and why should we recognize them?

In honor of Women’s History Month, I met with Carolyn Badger, Karen Schickedanz, and Betty Hughes (via Zoom from Florida) to answer those questions. Later, Gladys Lujan shared some of her memories.

Karen Schickedanz summed it up to some aspiring activists in 2003 when she said, “We need to hold [our State Legislators] accountable. And we need to work to find viable Democratic candidates who want to make this a quality state for all people in all respects—education, health care, and overall quality of life.”

The SaddleBrooke Democratic Club (SBDC) was too subdued to contain these four women back around 2002. It centered on informing and socializing, but Carolyn and Betty wanted to do more. So, together they created a sub-group, the Demo Dames Who Give A Damn. They soon connected with Karen and Gladys and went to work.

Betty had an RV decorated with Howard Dean campaign stickers and logos. She and Carolyn traveled around Pinal and Northern Pima County. Karen and Gladys supported John Kerry and Wesley Clark, respectively. Together, the four of them organized to promulgate Democratic values and motivate voters throughout Southern Arizona. Their activism eventually led Carolyn and Karen to working for the Obama campaign in Deming, N.M., in 2008.

The Demo Dames helped to start the Sun City Oro Valley Dem Club and assisted clubs in Dove Mountain, Casa Grande, Apache Junction, and Casa Grande. They brought together Democrats in Arizona City and held voter outreach and registration events in rural areas like in San Manuel, Catalina, Sierra Vista, and even participated in a voter registration event on the Tohono O’odham Reservation. In short, these women went anywhere they could help and everywhere they could learn.

Each took the lead in one of their four focus areas: local, state, national, and international politics. At monthly meetings, they had speakers from the University of Arizona Political Science Department and learned about the inner workings of the State Legislature and members’ roles in reaping profits from charter schools and other special legislation.

Their relentless activism invigorated and enlarged the SBDC by demonstrating that action can be a powerful tool and by recruiting inspiring speakers for the club as they rubbed shoulders with national, state, and local politicians. They attended opening days at the State Capital and pointedly confronted their Republican Representatives about the importance of issues like quality public education and accessible health care. Their focus group with State Senator Paula Aboud, a Democrat from Tucson, discussed Arizona issues and how to influence them for a better future. When demonstrations and special events were held at the State Capital, the Demo Dames carpooled or even chartered buses to take groups to Phoenix to participate and talk to legislators.

By August 2004, after a frenetic pace for almost two years, Carolyn, Betty, Gladys, and Karen agreed it was time to “fold back into” the now expanded and stronger SBDC. They had always insisted that every Demo Dame pay dues to the SBDC, so its membership was nearly doubled by now, and it was on solid financial footing to continue advocacy of Democratic values throughout Southern Arizona. The founding mothers signed a letter to the SBDC officially closing down the Demo Dames, with a reminder to the SBDC that SaddleBrooke Democrats need to continue to speak boldly and work tirelessly so that all Arizonans, and Americans, have an opportunity to be part of the American dream.