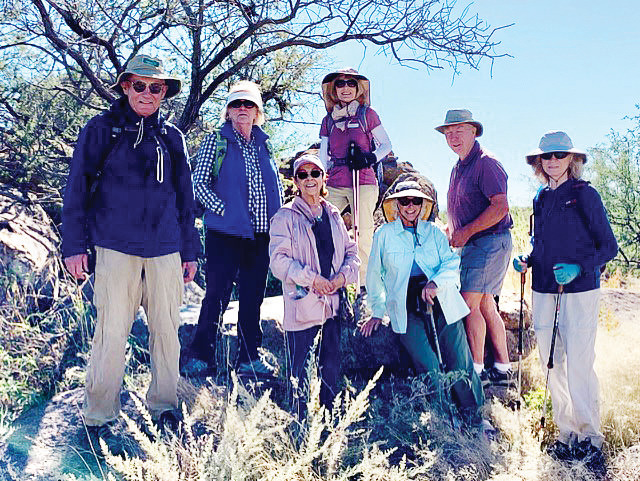 A dozen members of the SaddleBrooke Singles Club exulted in the glorious fall weather as they hiked the Arizona Trail after touring the historic American Flag Ranch House. While appreciating the picturesque Galiuro Mountains and unique rock formations, they encountered two gritty and determined hikers engaged in a “dog bites man” expedition, to wit, traversing the state of Arizona by foot to their destination in Mexico. After working up a hearty appetite, the hikers enjoyed lunch at Lupes (taco salad was a particular favorite), where they made the acquaintance of six Arizona State Troopers who, unlike the prior couple, were not fleeing to the border. All who participated in the hike looked forward to the next Singles Club hike at the Tanque Verde Ranch, scheduled for the spring.

Many activities for Singles Club members are on the agenda in a closer timeframe. The club president is hosting Thanksgiving dinner, which she describes as a “modified potluck,” to ensure that traditional Thanksgiving food will be offered, in addition to the Singles Club potluck staples of potato chips, taco chips, salsa, and guacamole. We are attending a holiday concert at the Gaslight Theatre, and a member will host our annual Christmas party in her home. Other plans include speakers on the topics of “How Not to Outlive Your Money” and “How to Be Healthy at Any Age,” a celebration of National Pizza Day with a pizza party, and the aforementioned spring hike.

If you are never-married, widowed, or divorced in SaddleBrooke and would like to socialize with a convivial bunch of similarly situated people, please join us at our weekly happy hour on Fridays at 4 p.m. Happy hour has become quite the event, with the number of attendees straining the seating capacity of the SaddleBrooke dining establishments. During odd months (January, March, May, July, September, and November) we meet for drinks and dinner in the Agave Lounge in SaddleBrooke One, and during the even months (February, April, June, August, October, and December) in the MountainView Clubhouse at SaddleBrooke TWO. We also meet for happy hour on the patio of the Preserve during the warmer weather. Due to temporary closings and/or prior bookings, check first before attending. For more information, contact Hazel Staloff at [email protected]