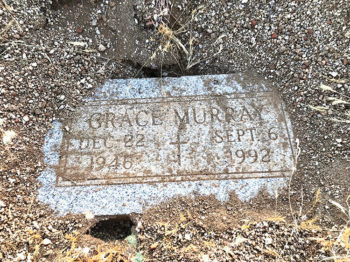 Hiking guide Ruth Caldwell led a hike from Golder Ranch Road into the Coronado National Forest in early May. Participants were pleasantly surprised by the interesting terrain with diverse views of the desert and the Santa Catalinas. Just as the sun rose over the mountains, Ruth guided the group to a low mound. She revealed the gravestone of one Grace Murray, buried here in 1992. The stone, obviously aging and receding into the ground, made one wonder, “Who was Grace Murray and why was she buried here, about a mile away from Golder Ranch Road?”

A little research revealed a Grace L. Murray is listed in the Social Security Death Records as dying in Tucson. Her Social Security number came from New Jersey. A prominent Murray family in Catalina, Bob and Della Murray, co-founded the Golder Ranch Fire District in 1976. Bob was Chief of the Golder Ranch Fire District until he retired in 1993. Could there be a connection?

Through the assistance of Bob Simpson, a SaddleBrooke historian, we learned that Grace was a nurse at University Hospital. Simpson found a newspaper photo of Grace helping a patient leaving the hospital. He also turned up a death notice indicating that Grace was 45 years of age, a nurse, living in Catalina. Barbara Marriott, another SaddleBrooke historian, is also doing some research into the mystery of Grace Murray’s gravestone. Stay tuned to learn more. SaddleBrooke hikers never know when a mystery will emerge.