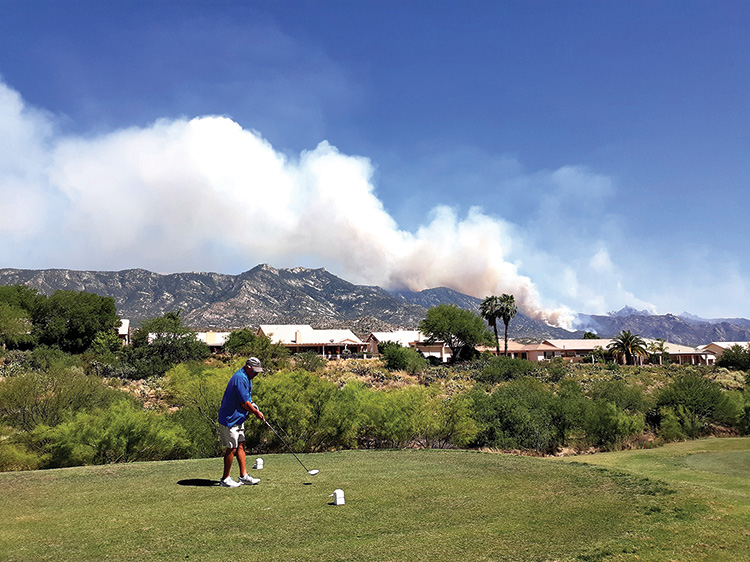 Hard to tell if we are playing golf in the smoke or “smokin hot golf”? As the Buckhorn fire continues to blaze all around SaddleBrooke, the golfers are learning to cope with the smoke and fire in the background.

In spite of the fire and smoke, the SaddleBrooke Men’s Golf Association (SMGA) played their monthly partner’s golf outing with a 2-man Chapman tournament. Thirty-eight two-man teams or 76 players teed it up in four flights of nine to 10 teams to determine which teams were the best in the smoke and flames. The teams are flighted or split up based on each team’s combined handicaps so the lowest handicap teams are in the first flight, next lowest handicap teams in the second flight and so on. The Chapman game requires each player to tee off, then hit their partner’s drive and at that point select one ball to play in and alternating hitting the shot. This game puts a lot of stress on your partner after the drives and helps to distract from the smoke and fire in the background.

Each of the four flights had a gross winner and a net winner. Apparently the smoke affected some of the players because Peter Wright and Fred Pilster, who won the second flight gross score with a 79, could not believe it after four-putting a par 3 hole from about 30 feet away and having to make an 18 to 20 foot putt for a bogey on the last hole. It could probably be called the miracle in the smoke for this team.

The other winners weren’t quite as crazy as this flight as you can see below.

Golf at SaddleBrooke goes on in spite of the smoke and flames, which adds new meaning to the old saying about golf as a “good walk ruined.”