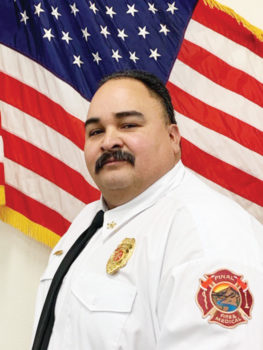 A recent study by the University of Maryland’s Do Good Institute showed that volunteerism is on the decline in America. If true, that makes Bobby Apodaca an old-school specimen. Apodaca, current chief of Pinal Rural Fire & Medical District, has been a part of the volunteer fire service all his life. It’s been a point of family pride.

The Winkelman native’s father, a bricklayer in the furnace at an ASARCO mine, was also the chief of the Winkelman Volunteer Fire Department. Bobby likewise served with the Winkelman department for a total of 21 years; for 13 of those years he was chief himself. His uncle, his brother, and both of his sisters were also members of the department.

In addition to his frontline service to the Winkelman VFD, Bobby Apodaca became increasingly active in service to volunteer firefighting on a statewide, even national level.

“Back in the day,” he says, “my dad was a big supporter of the Associated Firefighters of Arizona.” Founded in 1964, the organization, which aims to “support, coordinate, develop, promote, and implement the volunteer fire departments through Arizona,” became the Volunteer Fire Fighters of Arizona (VFFA) in 2005, and Apodaca at one point served as its president.

Other firefighting-related organizations with which Apodaca has been active over the years, in one capacity or another, include the volunteer sector of the Arizona Fire Chiefs Association and the Arizona Fire Service Institute. He was also a delegate to the Congressional Fire Service Institute (CFSI), the organization devoted to advising Congress with regard to the nation’s fire and emergency services.

It was through CFSI that, in 2003, Bobby Apodaca had one of the more memorable and glamorous experiences of his long fire service career. He and his brother Patrick were selected, out of thousands of entrants, to travel to Baltimore, Md. and tour the set of the film Ladder 49, starring John Travolta and Joaquin Phoenix. The brothers visited the locations, toured the Gorsuch Street station, and worked as extras (although, unfortunately, their scene ended up on the cutting room floor).

In recent years, Apodaca, who works days as an interactive TV technician at the Aravaipa Campus of Central Arizona College, has returned to a more hands-on role with a new department. In 2015 he joined Pinal Rural Fire District as a deputy chief; since 2017 he’s been the fire chief.

Operating out of two small repurposed automotive garages on the edge of the town of Mammoth, Pinal Rural holds vigil over the beautiful, lonely strip of Arizona State Route 77 stretching between Mammoth and Winkelman, and a few other sparsely-populated desert areas outside of Mammoth proper.

Calls are few, Apodaca admits, and unpredictable. “You’ll go a couple of weeks with no calls, but you could get five in a day.” This showed itself to be true in late May, when after weeks with almost no calls, Pinal Rural was called to three brushfires and one medical call in the same day. In that isolated region, prompt fire response is not guaranteed, so in conjunction with the Pinal Rural Fire Board, Bobby Apodaca and crew provide an important service to the area’s taxpayers.

The department’s equipment and vehicles are mostly hand-me-downs donated from around the state, and the staff are volunteers, some from the community, others aspiring paid firefighters looking for precious experience and training. Apodaca, of course, has plenty of experience to share.

Asked if he has a most memorable experience as a firefighter, Bobby Apodaca recalls an odd episode from the mid-’90s, his early days with Winkelman VFD.

“One of my first calls, we responded to a lumberyard fire. We were standing in Winkelman, in a parking lot, but the fire was in Hayden.”

Note: Our mission is providing the best customer service to the public we serve and those visiting our region, by way of ongoing training and comradery of our fellow brothers and sisters in uniform.