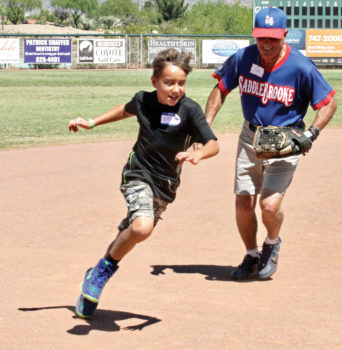 Coach Q tries to put the tag on Ethan as he rounds the bases; photo by Jim Smith.

The younger kids hit softballs either off a tee at home plate or pitched by SSSA pitchers Roy Stigers and Doug Sweetland. The hitting was spectacular and the speed running the bases hadn’t been seen on the SaddleBrooke Softball field since the Grandkids’ Day Games last Thanksgiving. While one group of grandkids was batting, others were being coached on throwing and fielding ground and fly balls. After each of the younger children had a turn at batting, all the grandkids, parents and grandparents gathered behind the Desert Point Scoring Pavilion for a group photo. This was followed by the older grandkids, fathers and grandfathers taking the field for their turn at bat.

A highlight of the warm sunny day was the ice cream provided by the Community Church of SaddleBrooke and served by members Nancy and Brett Carlson. Photos from the event are available on the SaddleBrooke Senior Softball website, www.saddlebrookesoftball.com. Any SaddleBrooke or SaddleBrooke Ranch resident interested in finding out more about playing softball should contact Stu Kraft at [email protected]