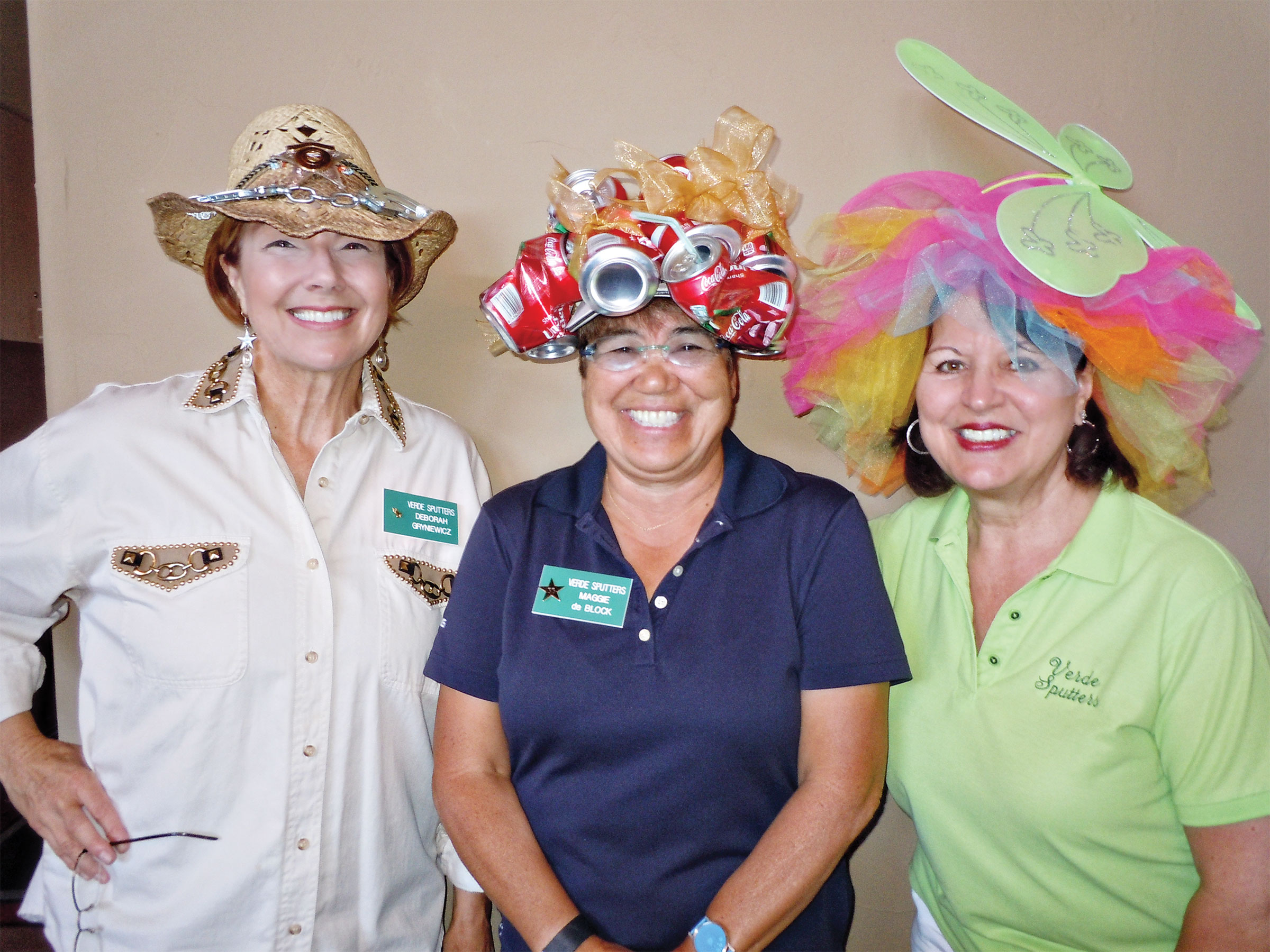 It has been a busy spring but things are beginning to wind down for the summer months. The Sputters were hosted by the MountainView Putters on Monday, March 14, another lovely SaddleBrooke morning. Our hostesses were delightful, the putting green was challenging, lunch was delicious, new friends were made and the Sputters look forward to hosting this always enjoyable event next season.

Monday, April 18 was the annual Fun Day putting event. Sincere thanks to Rosemary Topper and her committee: Diana Carbone, Sharon Powers, Marie Schmidt, Jean Shaffer and Darlene Weprich. The theme was Madd Hatters and almost all participants donned interesting chapeaus! Fortunately, the wind was a non-factor and we were able to putt without fear of having to chase our lovely headwear. The annual fun day scoring was in place where a ball passing within inches of a hole was deemed to have dropped. Winning the loosely named putting competition and finishing in first place was the team of Debra Gryniewicz, Jan Deer and Trudy Rossi. Second place went to Linda Carr, Gail Crawford, Carol Jones and Helene Wheeler with third going to Maggie DeBlock, Penny Fullenkamp and Sharon Powers. A special award went to Carolyn Bewalda and Sandy Morse in honor of their off morning on the green! Hang in there ladies, we all have bad days for sure.

The highlight of the very delicious lasagna lunch, however, was announcing the winners of the best dressed head contest. Prizes were awarded in three categories: Western, Derby and Crazy and the judges were two members of our own non-partial Food & Beverage staff, Trisha Rogers and Carolyn Butler. Winner of outstanding Western hat was Debra Gryniewicz whose hat was a walking sheriff’s belt complete with handcuffs. Best Derby winner was Sylvia Bonesky whose lovely hat would have been very well received at Churchill Downs and Craziest went to one of our most entertaining members, Maggie DeBlock, who wore a 12-pack of coke cans on her head! As always, it was a fun morning and we again thank the committee who worked so hard to pull it off.

At the Fun Day lunch a bit of business needed conducted. Officers for the 2016-2017 year were voted on and the following will serve from May 1, 2016 through April 30, 2017. Co-Presidents Lorraine Ezell and Trudy Rossi; Co-Vice Presidents Cathy Howard and Barbara Turner; Co-Secretaries Donna Gruninger and Mary Kopp and Treasurer: Maggie DeBlock.

Upcoming is the end of season Founders’ Invitational. Details and photos of this special event will be available in the next edition.

Membership in Verde Sputters is open to any resident of HOA 1, HOA2 and The Preserve not belonging to a sanctioned SaddleBrooke golf group. For more information please contact our membership team of Elaine Ackerman and Donna Gruninger at 825-8123.