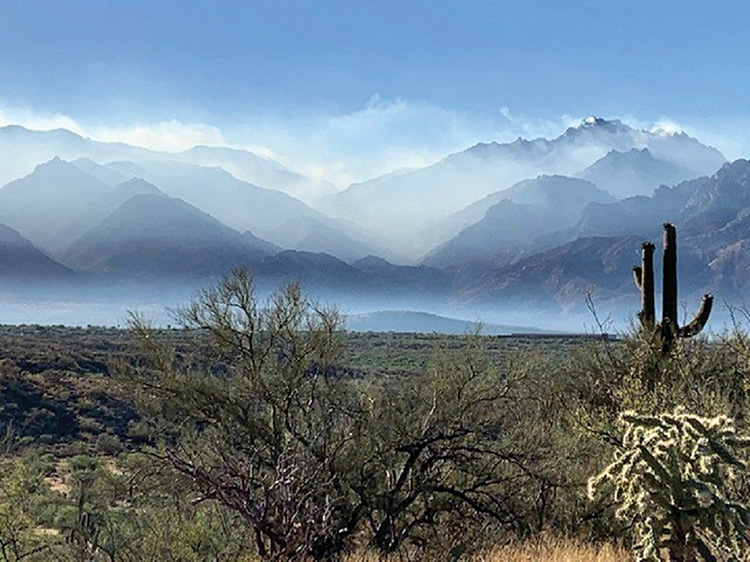 The Catalinas on fire; smoke fills the air (Photo by Elissa Cochran) 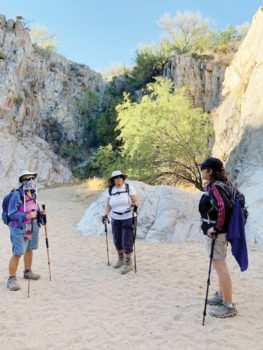 On June 18, four SaddleBrooke hikers—Carol Burke, Elissa Cochran, Yvette Sibulsky, and hiking guide Karen Gray—set out for Honey Bee Canyon to hike the south trail, a path they had never before hiked. The scheduled hike for this day was to be the Nature, Canyon, and Birding loops in Catalina State Park. Unfortunately, the Bighorn Fire had closed down the entire park and many of the Catalina Mountain trails. Undaunted, Gray made the change to Honey Bee, which lies to the west of Oracle Road and all the fire traffic. The trail was, thankfully, also smoke free.

The Honey Bee Trail makes a loop of about 2.6 miles, and the distance can be increased either by doing it twice (once in reverse) or by appending an extra short loop, which adds about another mile. The first mile descends to an old dam. Hikers went through the dam in a door that opens up to a canyon with high walls of granite. They walked in the shadow of this canyon, in a wash, for about five minutes and then headed up one of several hills on this trail. The way followed a series of long hills circling Honey Bee Canyon until it ended in the wash where the north trail begins.

The group decided to do the shorter second loop instead of the total reverse loop because of the increasing heat of the day. They continued back around towards the parking lot and then took another trail that passes several relics of the settlers who lived here in the past. The hikers enjoyed this new experience and said that they would be happy to do it again.