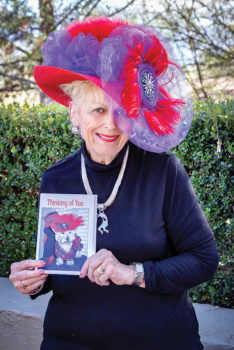 Mike Sedgwick
Darlene Pitman started selling her crafts in the Gift Shop two weeks after moving to SaddleBrooke with her husband, Richard, in 1998. She has always enjoyed creating things and after marriage ran a floral decorating business from her home for many years, working initially with homeowner parties and later with hotels in Los Angeles. During her Gift Shop years, she has made and sold 400 “Time Out Kids.” Her Red Hat sales were hot for several years, but now are in less demand because of fewer Red Hat chapters in SaddleBrooke. Darlene is happy to convert anyone’s existing hat with netting, stones and flowers, creating some spectacular Red Hats. She knits scarves, makes bird houses and creates floral arrangements for the Gift Shop, but has reduced her crafts activity following Richard’s death from Parkinson’s Disease in 2007.
Darlene was born in Bell, California, then moved to Porterville where her parents purchased an orange grove and a small farm. She attended Tulare and Downey Junior High Schools, then Earl Warren High in Downey. Immediately after high school, she met and married her first husband, Kent. On impulse one day, she applied for a job as window dresser at Grants, a department store located on the street of the famous Rose Parade in Pasadena. The job allowed her to choose the décor, color and accessories, exactly the kind of thing she loved except lifting and moving furniture got too much for her when she was expecting her first child, Mike. Later, Darlene and Kent moved to Santa Ana where their second son, Sean, was born.
Darlene was vice-president for the PTA boys school, handling special events decorating, carnival and luncheons. Later, she worked for Southern California Edison, assisting with home economics, putting on programs, and decorating tables for City Council luncheons.
When Kent died of cancer at age 39, Darlene purchased two acres of land in Tulare to create an Old McDonald’s Farm, raising calves and various other animals for her boys. She also taught crafts to 4H girls.
After ten years, she married her second husband Richard, together with five teenage children and a German exchange student. She also worked for JCPenney in their bridal and dress department. This kept Darlene very busy. She and Richard visited SaddleBrooke in 1997 via the Guest Program, loved everything they saw and moved here one year later. Their guest hosts urged Darlene to join the Gift Shop.
Travels have included nine cruises to Hawaii, Panama Canal, the New England States, Santa Fe, Taos, the Sequoia, Yosemite, Whistler and five visits to Alaska where son Sean and his wife Robin now live.
Darlene loves working in her large patio room. A lifelong artist, she enjoys meeting Gift Shop visitors, smiling and laughing over her “Time Out Kids” and “Dar’s Lucy Cards.” A happy, and very sociable woman, Darlene feels she will never grow up.