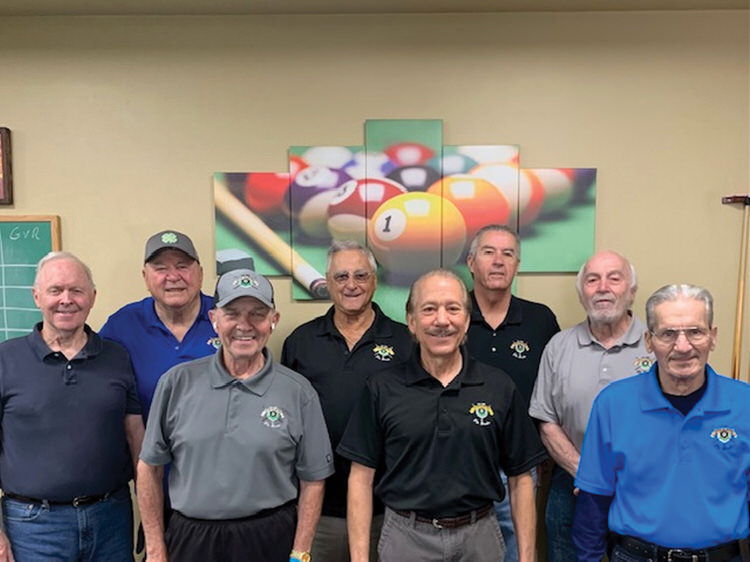 The Pool Players of The Brooke (PPB) would like to thank Green Valley Recreation’s (GVR) Billiard Club, Tom Keller (president), and GVR’s billiards team for their pool table prowess, camaraderie, friendly competition, and a congenial luncheon at the RoadRunner Grill after the 8-Ball Challenge. Another thank you goes out to Tony Cardillo, PPB Travel Team director, for organizing this event.

On Dec. 11 the GVR Travel Team ventured up to SaddleBrooke for an 8-Ball Team Challenge. We were competing on four 8-foot Connelly pool tables for temporary ownership of a traveling bronze plaque that has been in GVR’s possession. Our team was made up of four two-player teams, and Green Valley also had four two-player teams. Our teams consisted of Fred “The Baker” Dianda and Joe “Ball Breaker” Vidmar, Joe “Fast Eddie” Giammarino and Gary “One Rail” Barlow/Dominic “The Doctor” Borland, Tony “The Snake” Cardillo and Ron “Dblo7” Ridge, and Phelps “Frenchfry” L’Hommedieu and Dave Parker. Our opponents from GVR were Dave Kroth, Dick Ohnstad, Wendell Rude, Bob Hamilton, Mel Majeau, Jack Prescott, Ken Watson, and Tom Keller.

The format was simple and interesting. Each of our teams would play each of their teams three games of 8-Ball with each game won being one point for the winning team. There were a total of 48 points in the match. PPB won the first round 7 to 5. The second round gave the PPB a larger lead when they won the round 8 to 4. After the second round, the PPB was ahead at 15 to 9. The third round was a tie at 6 to 6. Going into the final round, the PPB was up by the score of 21 to 15. The PPB would need to win four games in the final round to take the traveling bronze plaque from GVR. That is exactly what the PPB did. They lost the round by a score of 4 to 8, but it was enough to take the plaque by a score of PPB 25 and GVR 23. Congrats to the Pool Player of The Brooke’s Billiards Club!

This event was a continuation of a friendly but fierce rivalry. SaddleBrooke is proud of their team, and they thank GVR for venturing up to SaddleBrooke—driving through the Tucson Marathon, which caused a delayed start of the 8-Ball match. The traveling bronze plaque mounting ceremony was on Dec. 21.