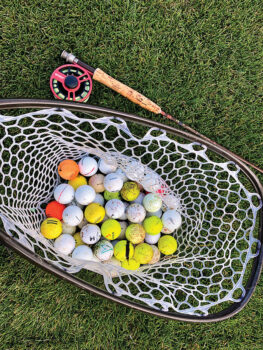 As with many other clubs in SaddleBrooke, the SaddleBrooke Fly Fishers (SBFF) has not been able to meet in person over the past year, but we’ve definitely continued to grow. By the end of February, we are pleased to announce our official membership stands at 53 strong. Not bad for a club that got its start just a few weeks before the words “global pandemic” became ubiquitous.

Now a year later, we are providing our membership an SBFF Academy, envisioned and implemented by our Education Committee Chair, Dean Umemoto. We conducted these sessions over Zoom and the last four discussed fly-fishing safety, equipment, casting, and entomology. The fifth in our series was called Fly Fishing Arizona—Locally and Beyond. For this session, we welcomed two Arizona fly fishers who offered a wealth of information based on their combined 75 years plus of fly fishing in Arizona.

Jeff Collins from Tucson, mostly fishes here in southern Arizona in a float tube and was a previous president of the Old Pueblo Trout Unlimited chapter. Mike Faulkinbury was born in the White Mountains, but now lives in Queen Creek and most of his fly-fishing experience is in the Phoenix area and north of there. They both talked about their experience fishing in eight of the states’ regions and provided advice about how to be successful at fly fishing around the state.

Those of us sequestering in SaddleBrooke, have continued in our commitment to be good stewards of our community by picking up trash when fishing around the SaddleBrooke One lakes, and also, by rescuing golf balls from the lakes for sale (about 300 by the end of February), and monetary donation to SaddleBrooke Community Outreach (SBCO).

The SBFF Board is in ongoing discussions about next steps now that more people are fully vaccinated and we can see the light at the end of the tunnel. When safe, we definitely want to resume meeting in person and having social gatherings. We are also very interested in beginning to plan some fly-fishing trips both within Arizona and to other states.

If you are interested in joining us, we’d love to have you. No experience, no worries. We have members who have never fly fished to those who have professionally guided, taught fly fishing, and even owned fly shops. One thing we all have in common is that we all love this sport (or at least the idea of participating in it) and want to be around others who feel the same way. You can reach us via email at [email protected]