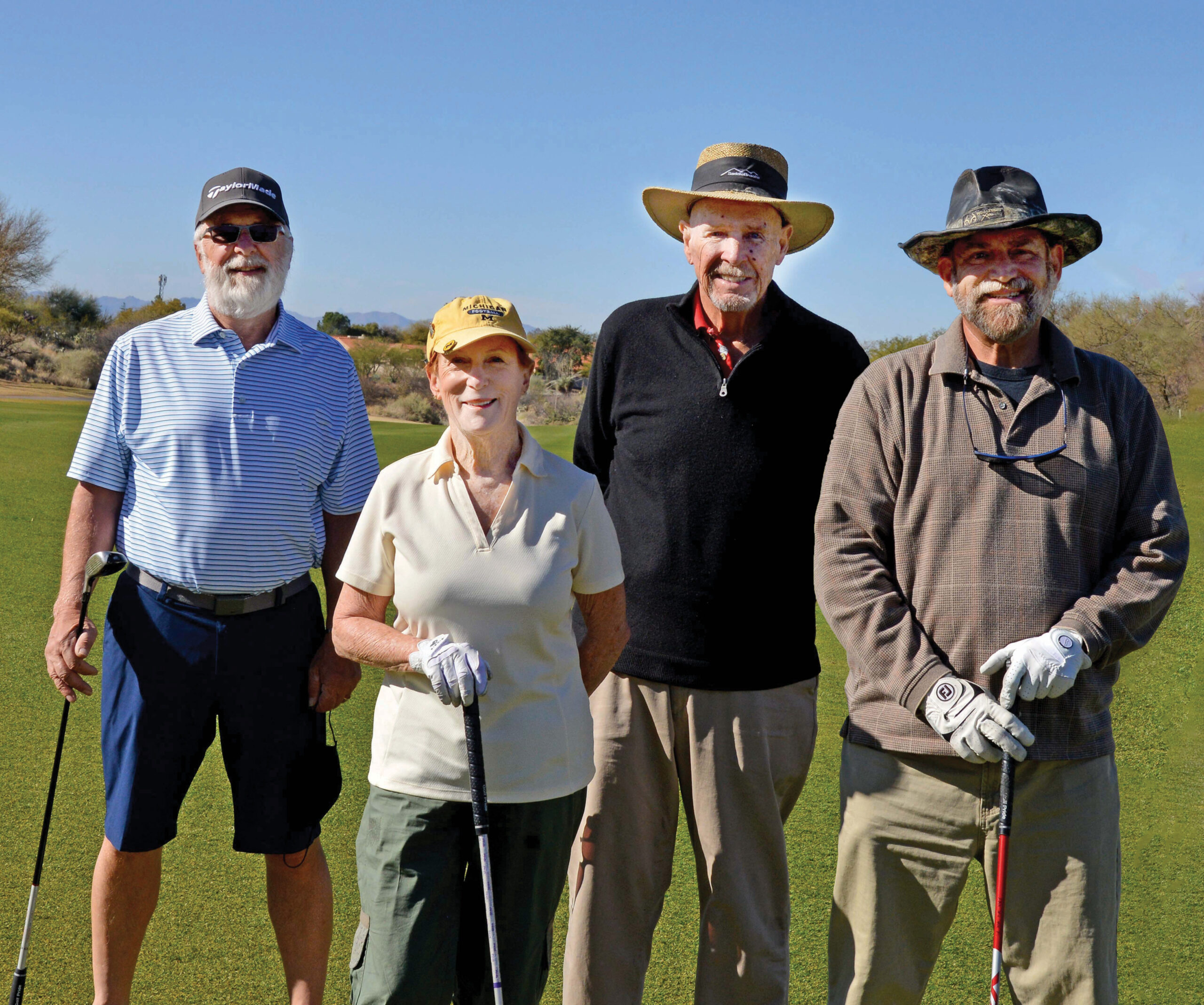 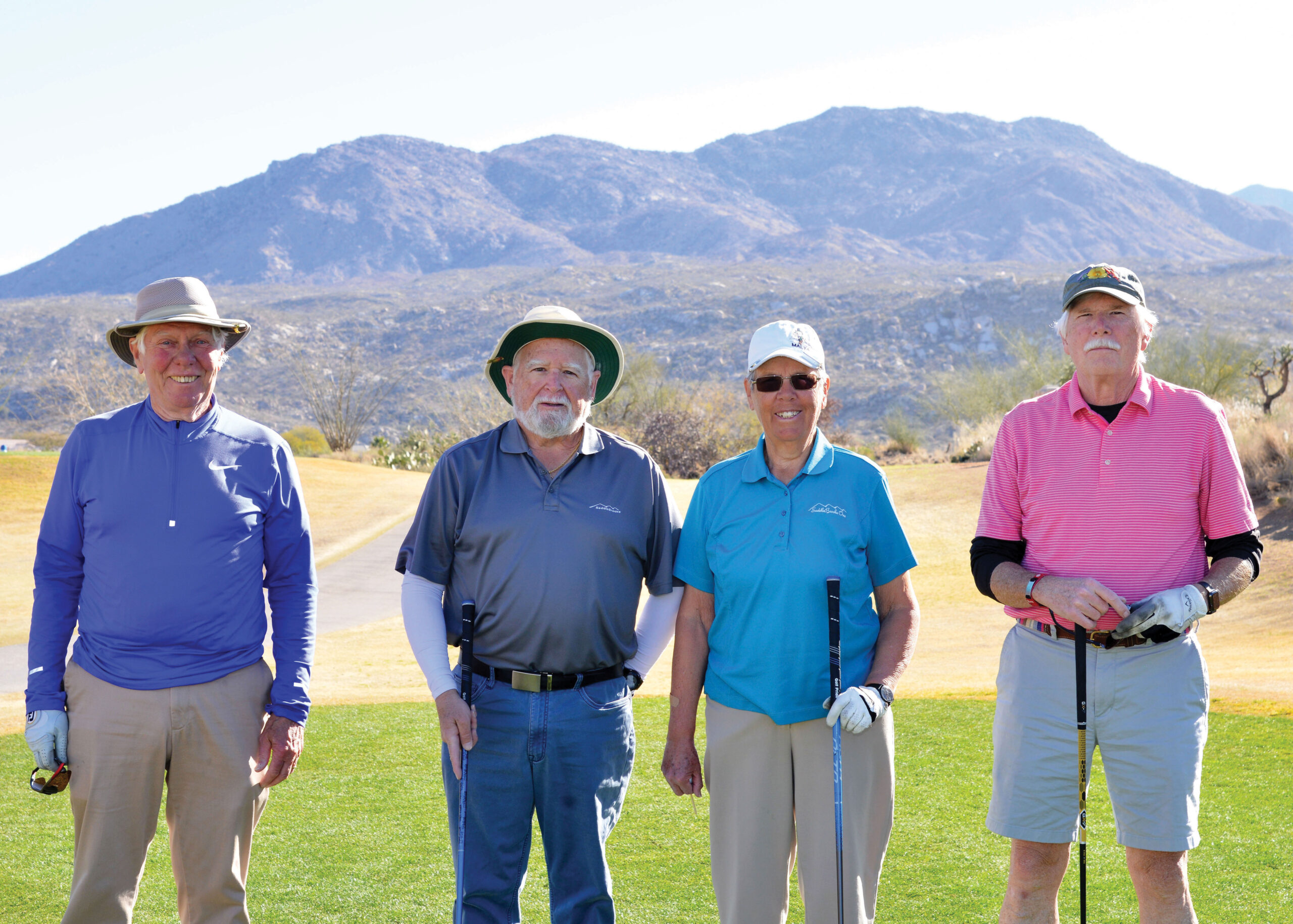 Whether you like a challenging game of competitive golf or only to play for fun, SaddleBrooke Lady Niners may be just the golf club for you.

For those of you who like to compete, Lady Niners has tournaments throughout the year.

Our Niners Unite Tournament was held on Feb. 24. This was our 9th annual tournament combining the SaddleBrooke Men’s Niners with our Lady Niners. This fun scramble combined men and women into foursomes playing from forward tees. The men played from red tees and the women from aqua tees. This event was full of friendly competition and laughter. To further unite the men and women Niners, participants enjoyed an excellent lunch of roasted pork tenderloin with apple jack-bacon chutney, roasted sweet potatoes and vegetables topped off with a peach cobbler à la mode. Congratulations to our winners: Calvin Saulsbury, Bob Nelson, Marsha Foresman, and John Thomas. Cheers to our second-place players: Jay Love, Sheryl Nugent, Bob Blizard, and Chris Apitz.

If more serious competition appeals, you may like our State Medallion Tournament. Winners are determined by the best two scores from four qualifying rounds. There is a low gross and a low net winner. Thirty-five members have competed in the first two qualifying events. Players are not required to participate in all four rounds to be eligible. With two remaining qualifying rounds on March 23 and April 20, all our members can still qualify for the State Medallion tournament. Clubs from the entire state send teams to compete in this tournament. SaddleBrooke Lady Niners will be able to send two teams to the State competition, which will be in January 2022 at a course near Phoenix. The qualifiers play as a team. One member’s gross score is added to the other member’s net score to determine the team score. In addition to attending the state tournament, the qualifiers are awarded special ball markers that signify that they were the winners of the qualifying tournament. Participating in the State Medallion Tournament is a whole new level of fun.

There is more competition! The Lady Niners’ Club Championship is a multi-day competition being played in March. One overall low gross winner will become the Club Champion. Flight winners will be determined by Stableford Points, which is based on the number of strokes taken at each hole. Unlike standard golf scoring, the objective is to have the highest score. We have other special events during many months of the year, and always are very appreciative of our sponsors: Coyote Golf Cars, Golf Cars of Arizona, and Morris Hall PLLC.

If you prefer to golf for fun, Lady Niners is perfect for you. Every Tuesday morning, we golf in fun, friendly 9-hole games. We follow established rules and etiquette for golf but welcome players at all skill levels. On the dates of competitive tournaments, those of us who prefer to play only for fun play as Follow the Field golfers. This results in both an enjoyable golf experience and fun camaraderie among our members. Check us out at our website at www.sb9ers.org. New membership applications are available outside the SaddleBrooke Pro Shop in the posting room.