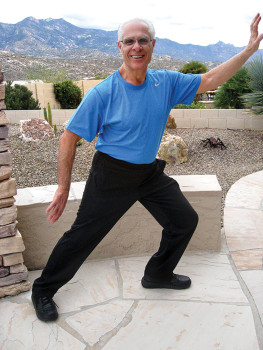 Joe Pinella provides SaddleBrooke residents with the opportunity to improve their balance and greatly reduce the threat of injury or death from a fall.

“Falls are the leading cause of both fatal and nonfatal injuries among people age 65 and older,” according to the Centers for Disease Control. As a result, fall prevention must become a number one priority for an aging population.

In the past decade, more than 200,000 Americans over 65 died following falls and in 2012 alone, emergency rooms treated more than 2.4 million people over the age of 65 for injuries resulting from a fall.

The biggest reason for the falls, 41 percent, was directly attributed to incorrect weight shifting. Just standing up and sitting down put them in greater risk of losing their balance than merely walking around. Only 20 percent was due to someone tripping.

The body has three systems which primarily control our balance, the visual system, the vestibular system and the proprioceptive system.

The vestibular system becomes less sensitive as people age. Thus individuals tend to rely more on their vision which is relatively slow compared with the vestibular system. The proprioceptive system also weakens with age, but can be developed to become the integral part of balance as the muscles, tendons and joints feel what is going on with the body and can act accordingly.

Tai Chi, Qigong (pronounced Chi Gong) and other disciplines which have been around over 5,000 years have proven to be extremely effective in developing and maintaining the proprioceptive system.

Joe Pinella, a Qigong and Tai Chi Kung instructor, teaches beginning classes in SaddleBrooke three times a week at 10:30 a.m. on Tuesdays and 10:30 and 11:45 a.m. on Fridays at the HOA 1 Fitness Center. He also teaches an advanced class known as Chi Fitness on Thursdays at 11:15 at the HOA #1 Fitness Center and Advanced Sports Conditioning on Tuesdays and Thursdays at 2:30 p.m..

Pinella has studied and practiced the ancient Chinese healing arts for fifty years. He explains how these disciplines increase the effectiveness of the proprioceptive system. “They consist of three basic principles: awareness, building a foundation and proper movement sequences for functionality.”

As people age they become less aware of what they are doing. They basically operate on automatic mode knowing they have lived 60 plus years without any help.

Qigong and Tai Chi Kung require very slow, purposeful movements so as to realize what your body is doing and which muscles, tendons and joints do what. In Pinella’s classes he tries to put his students out of balance so they can experience the feeling of which muscles are needed to rebalance themselves. This provides both the awareness and the foundation.

And finally, each body part is put into operation to do functional tasks. This means putting it all together to do things that are integral to life and balance. Pinella refers to this as “the right muscles all firing in sequence.”

Qigong and Tai Chi Kung have been recognized as beneficial in preventing falls at several retirement facilities across the country. Dr. Lewis A. Lipsitz, a professor of medicine at Harvard said, “If only we could put Tai Chi in a pill.”