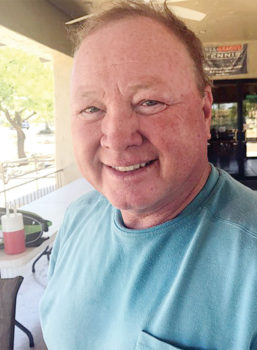 Douglas Wolf is a firework of explosive enthusiasm. His friendly, gregarious personality pounds its way into your heart and immediately enriches your day. No one will ever have to search for him. Just listen. You’ll know where he is when you hear his laughter ring out in our desert community.

He never missed a beat when he moved here from the San Diego area where he enjoyed success in the real estate business and as a software consultant. First on his agenda was to engage in a vast array of local activities. The meetings he attended covered a plethora of interests. Without missing a fast-paced step he learned about the environment of his new home, its culture, and its political atmosphere.

Soon his many friends began to urge him to run for the office of Pinal County Assessor. He orchestrated a brilliant campaign to run successfully in the Republican primary and then proceeded to win the office in the general election. Doug notes that he is not the “Tax Assessor.” Instead, he only sets property valuations.

Tennis came late in life for Douglas. At the age of 27 his future father in law told him that he couldn’t marry his daughter, Gloria, unless “you learn to play tennis first.” With that agenda he rushed to the tennis courts and the marriage license office.

Success on both counts followed in short order.

Doug maintained a value-set as he approached the game of tennis. He continued his lifelong devotion to the concepts of loyalty, integrity, and competition. He discovered those values in abundance on the tennis court where so much can be learned about another person.

The SaddleBrooke Tennis Club, STC, was the ideal venue for Douglas and Gloria to engage in a friendly, healthy life style that is particularly well suited to the Sonoran Desert. Socially active and competitive in the most positive way, STC provided a fertile environment for sun drenched activities that include vigorous play and dynamic entertainment. They found a new home on the STC patio where parties are a well-established venue for friendships to thrive.

There’s more to Douglas Wolf than the political being and athlete that we see chasing tennis balls all over the court. He is smart as well. Note that he authored more than 30 books on such inscrutable subjects as computer software. They can be found on Amazon in the popular Dummies genre.

What’s next for Douglas Wolf? Politically? HOA involvement? STC leadership? Sure, but never overlook the less than obvious. Watch for Doug’s interests to evolve in the area of SaddleBrooke entertainment. Wouldn’t he be great as a standup comedian? Can’t you envision that overwhelming personality on stage? A treat could be in store for us.

Doug is another SaddleBrooke resident who has made the very best of our community by engaging in STC tennis play and social activities. You can join in. Just call Connie Kacer, Membership Chair 825-7585 or the STC office 825-0255. It’s that easy.