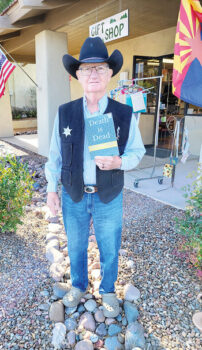 Stuart Watkins with ‘Death is Dead’

Death is Dead, by SaddleBrooke resident Stuart Watkins, was inspired by a sermon Stuart heard at Vista United Methodist Church in Catalina, Ariz.

Pastor Fred Baum explained how the death of Jesus ended death for the rest of us when He arose from the dead.

“Death, where is thy sting?” That phrase finally had real meaning for Stuart, and he decided to write on the topic.

When the book was given to Pastor Fred Baum, he gently pointed out a few corrections that needed to be made to accurately explain some of the pictures included in the book.

Stuart asked if the humorous story of God, Jesus, and the Holy Spirit visiting Tucson during a monsoon should be omitted, but Pastor Baum said he enjoyed the story.

Stuart wanted to pay tribute to the women in the bible, so a number of pages are dedicated to them, with some explanations of the roles they played.

Pastor Baum then told Stuart that some of the first apostles were women. He continued that many people just think of the 12 disciples, but women were very active in the early days of Christianity, as they are today.

Stuart Watkins has written and published some poems with a religious theme in the past, but this is his first religious book. Death is Dead is available on Amazon and in the SaddleBrooke Gift Shop. The copies in the Gift Shop have been corrected by the author, and the ones on Amazon will soon have the edited versions.