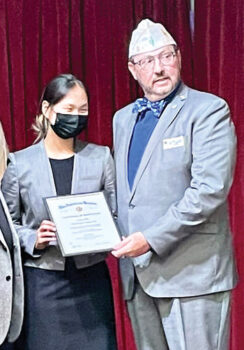 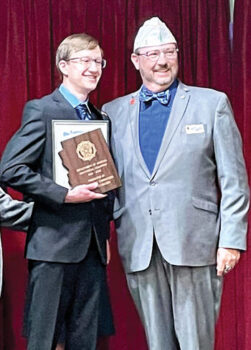 On to national! A stellar performance by the two American Legion Oro Valley Post 132-sponsored contestants who competed at the March 19 state level of the American Legion Oratorical Scholarship program. Caleb Rasor placed first, and Grace Shin placed third among the best six contestants in the state. Caleb now advances to the national competition to be held in Indianapolis, Ind., in April. Caleb and Grace, both sophomores at BASIS High School in Oro Valley, had placed first and second, respectively, in the previous three levels of competition. American Legion State Commander Ben Headen presented Caleb and Grace with their certificates. The annual American Legion U.S. Constitution knowledge-based oratorical contest is designed to instill a greater knowledge and appreciation of the U.S. Constitution among high school students. The Post’s program is the most successful in the state, with five of the last seven Arizona delegates sent to the national competition having been sponsored by Post 132.