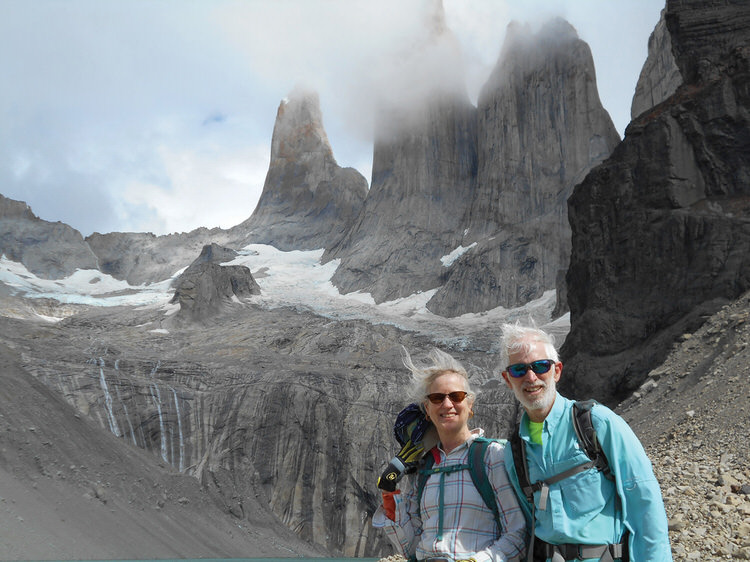 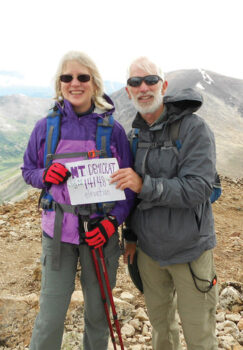 Susan Hollis and Randy Park atop Mount Democrat in Colorado

Like so many of us, Randy Park and Susan Hollis had been searching for just the right retirement community when they found SaddleBrooke in 2007. While they live in SB full time, they continue to do a lot of traveling, primarily in the summer months, recently completing a bike and barge trip in the Netherlands. Planned travel for 2023 includes a bus and train tour of Southern Spain, a Mediterranean Jazz cruise, and a bike club trip to Coeur d ’Alene, Idaho. Together, they have visited all 50 states, 30 state capitol buildings, and almost all the national parks west of the Mississippi!

In what might be considered a bit of an understatement, Randy and Susan describe themselves as “outdoor people.” Both are recreational golfers, avid skiers, and bicyclists. And, of course, Susan and Randy love to hike! They both joined the SaddleBrooke Hiking Club (SBHC) in 2008 and became guides in 2010 and 2016, respectively, leading mostly A and B level hikes.

Susan has served as associate chief guide and chief guide and co-organized SBHC trips to the Grand Canyon in 2011 and 2018 and to Moab, Utah, in 2014. Randy is a past vice president and president of the SaddleBrooke Hiking Club. He co-organized a trip to Durango, Colo., in 2019 and is scheduled to do so in Anza Borrego Springs in 2023. He coordinated trips to Havasupai in 2015 and 2016 (which were filled within 30 minutes of being announced!) and Marble Canyon in 2017, in conjunction with Northern Arizona University. They were jointly in charge of awards and statistics for the club from 2008 to 2017.

Together, this dynamic hiking duo has really covered some miles! Major accomplishments include 800 miles of the Arizona Trail (from Mexico to Utah) with Larry Linderman’s group between 2010 and 2012; 500 miles of the Colorado Trail (from Denver to Durango) with help from other SBHC members, in day hikes from 2013 to 2018; a single-day North Rim to South Rim of the Grand Canyon, as well as several longer trips overnighting at Phantom Ranch; around Mont Blanc through France, Italy, and Switzerland; the W Trek in Torres del Paine of Chile and the Fitz Roy area of Argentina in Patagonia; backpacking the Inca Trail in Peru; covering significant portions of the Tongariro Alpine Crossing, Coastal, Kepler, and Routeburn Tracks in New Zealand; as well as the Bernese Oberland and Zermatt areas in Switzerland. Randy hiked Mount Whitney, traveling 22 miles and more than 6,500 feet elevation gain/loss, in just 11 hours.