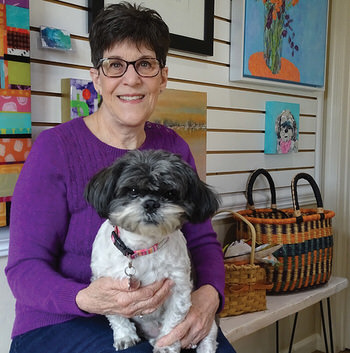 Terri Garner holds her muse Libby in her SaddleBrooke studio, flanked by some of her work. (Photo by LaVerne Kyriss)

Terri Garner began exploring art later in life. “I had a vivid imagination as a child and was surrounded by talented, creative people. I was always interested in creating things and trying out new ideas. I tried coloring my hair, redecorating rooms, and other adventures,” she remembered. “I learned lots of crafts from my extended family, but I never explored the arts.”

“After I retired and we moved to SaddleBrooke, I explored a lot of media and styles. I took online and in-person classes. One of my instructors said something that stuck with me: ‘Do what you love, and your creativity will expand.’ I had become interested in collage, and that’s what started my journey,” she explained.

“I love animals, and dogs particularly, so I started filling my sketchbook with drawings of dogs. I drew different breeds, different expressions, and focused on details—noses, mouths, fur. I saw a collage of a dog and thought I would try that,” Garner noted.

“We had adopted a shelter animal, so Libby became my first subject. I posted the result on Facebook and got lots of positive response. So now I create caricature collage pet portraits. These are not fully realistic but capture the essence and personality of the particular pet,” she said. “I focus on the eyes and the expressions of the specific pet. My creations are a hybrid of paintings and collage.”

The work requires lots of patience. Garner starts with a photo of the pet and a conversation with the owner to learn about the particular animal. She sketches the pet in a variety of poses and settles on the one that she thinks best captures its personality. Then the work begins to choose the colors that will be included in the portrait.

Garner has a wide variety of papers for collage. Many are ones she’s hand-painted with various patterns. “I spend hours and hours picking papers. If I don’t have what I want, I paint it using stencils, freehand, and other techniques. I use a variety of rice and other papers, song sheets, tissue, and even old book pages. I paint them with a variety of patterns and designs to get exactly what I want. I sort the papers by color on a set of colored trays to keep everything organized,” she explained.

Then the work of building the portrait begins. Garner first paints an underpainting to help guide her. Then she begins to build by placing small torn pieces of paper and gluing as she goes along. “I always start with the background and then build the figure. It takes a lot of work to get the depth and texture of soft fur,” she added. “I live with the work and decide if I’ve captured the animal’s essence. I ask, ‘Is it coming alive?’ I add more collage and tweak the work to solve problems. I add more rice paper to give it more depth.”

Libby is Garner’s muse. “She inspires my creativity. She encourages me to take breaks and to have an occasional treat while working. Libby has a designated spot in my studio and always accompanies me when I’m creating,” Garner smiled.

Garner encourages everyone to try art. “Try something with a subject matter you enjoy, whatever media you choose. Art is about the process, not the outcome,” she summed up.