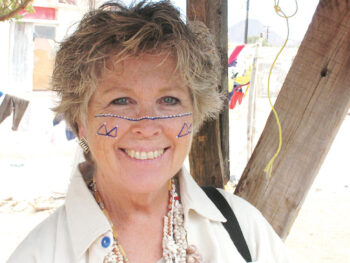 Carolyn O’Bagy Davis, shown visiting the Seri Indian Village in Sonora, Mexico, will be the FSL guest lecturer in February.

On Thursday, Feb. 9, at 4 p.m. in the DesertView Theater, Friends of SaddleBrooke Libraries (FSL) will host the fifth lecture in its 2022-23 series. Carolyn O’Bagy Davis will present “Hopi Quilting: Stitched Traditions from an Ancient Community.”

According to Davis, the story of Hopi textiles and the history of quilting on the mesas in Northern Arizona is an amazing tale. For centuries, Hopi men have grown cotton and spun and woven the fibers into blankets and clothing. With the coming of Anglo missionaries and government officials, quilting was introduced to the Hopi people in the 1880s. Quilts quickly became integrated into Hopi culture and ceremony. Quilts are used in every Hopi household. They are given at the beautiful dawn Baby Naming Ceremonies, and at the end of a Hopi’s life, they are used as a burial shroud. Hopi women and some men are fourth- and fifth-generation quiltmakers. As the artistic traditions of two different cultures are blended together, it is not uncommon to see a quilt with a traditional Anglo pattern and an ancient Hopi image, such as a kachina or a clan motif, stitched into a quilt top. Along with presenting historic background and many new and vintage images of Hopi scenes and quilters, Davis will provide an extensive trunk showing of Hopi quilts and textiles.

Davis, a fourth-generation descendant of Utah pioneers, has written 15 books on the history of archaeology, quilting, and the west. Her book, Hopi Summer, was named One Book Arizona 2011. She earned her B.A. degree in anthropology from the University of Arizona. Carolyn lectures extensively to history, archaeology, and quilting groups around the country and has curated many traveling museum exhibits, including “Goldie Tracy Richmond: Quiltmaker and Indian Trader,” “Hattie Cosgrove’s Mimbres Archaeology in the American Southwest,” “Quilting from the Hopi Mesas,” “Quilted All Day: The Quilts and Prairie Journals of Ida Chambers Melugin,” and “From Clay to Cloth: Hopi Pottery and Painted Quilts.”

Carolyn was the founding president of the Tucson Quilters Guild (1976) and also Old Pueblo Archaeology Center (1994). She has served on the board of the American Quilt Study Group, the Treasure Hill Foundation (Mimbres Culture preservation), the Arizona Archaeological and Historical Society, and was recently inducted into the Society of Women Geographers (the women’s association affiliated with the Explorer’s Club; she was profiled in They Made Their Mark: An Illustrated History of the Society of Women Geographers). Davis has appeared on Simply Quilts, a feature program on HGTV, and American Quilter on Lifetime, and assisted with a film documentary on the history of Hopi Indian quilting produced with support from PBS. In September 2010, she was inducted into the Arizona Quilters Hall of Fame.

This lecture is free for Friends of SaddleBrooke Libraries members and $5 for nonmembers.