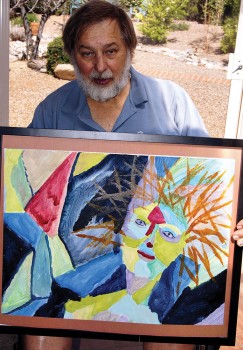 Fred Taylor’s life has been a series of challenges. Perhaps because of them, the strong images, construction, brisk brushstrokes and vivid colors within his sculptures, mixed media and paintings tell introspective stories.

Born near Portsmouth Naval Shipyard in Virginia, Fred’s father George was an admiral’s marine guard during World War II. After the war George relocated his family, wife Iole, daughters Cindy and Morgan, and Fred to Amherst, Ohio, and then in 1960 to Tucson, Arizona.

Fred recalls Tucson was very different then as Ina Road was bordered with cotton fields and Tangerine was a dirt road. Fred laughs that his school bus, which traveled from River Road to Catalina to Amphitheater High School, was never more than three-quarters filled. When not in class, Fred played defensive and offensive tackle on his school’s football team. He hunted and looked for pottery shards with his friend on nearby Nelson Ranch. Then when a junior, Fred’s life took a dramatic turn.

At his father’s insistence, Fred enlisted in the Navy Reserves. He was only sixteen. When not attending school, Fred worked aboard a ship in San Diego. Immediately after graduation, Fred served two years aboard the USS Monticello. Once discharged and back in Tucson, jobs were unfulfilling. He was struck by Valley Fever and spent months homebound recuperating; finances dwindled. He made a hard decision and reenlisted.

Assigned to the Navy Mobile Construction Battalion south of Da Nang, Fred found himself amid the Vietnam War. It was a dangerous existence that resulted in Post-traumatic Stress Disorder (PTSD) and Agent Orange neurological issues.

When again a civilian, Fred earned a political science degree from the University of California in Santa Barbara. Upon moving to Illinois, he worked for a firm in accounting and procurement and obtained a Master’s degree from Illinois Central College. It was then Fred met his wife Faye. Then too, PTSD and neurological symptoms began to surface.

To ease pressures, Fred and Faye bought a 72-acre farm in Madison, Wisconsin, where they lived for 30 years. He worked both for a commercial printing company and on his farm. He found peace, healing and surprisingly, creativity. He wrote poetry and experimented artistically. Completely self-taught, Fred built natural dioramas, sculpted and painted. Eventually Wisconsin winters proved too hard and his now Parkinson symptoms advanced. They moved to Tucson, and in 2007, to SaddleBrooke where Fred found the SaddleBrooke Fine Arts Guild (SBFAG) and long-time mentor, artist and art professor, Manuel DeLeon.

Today Fred’s publications and award-wining art are exhibited and sold throughout the country. Often he plunges into his inspirations, lost in his work, until blissfully exhausted. Uninhibited by boundaries, he is not restricted by medium, size, style or subjects. Recently, his black and white watercolor Dong Ha Bridge won first place in the Tucson Veteran’s Affairs regional juried show. The VA has sent this painting on to its national competition as its entry. A self-taught artist who found inspiration on a Wisconsin farm, Fred Taylors’ artwork tells remarkable stories of a remarkable man.